John Belushi graces the issue of this Rolling Stone, which arrived in my mailbox toward the end of my junior year of high school. The 33-year-old comedian, actor and singer had died on March 5th of a drug overdose. A true waste. Inside, there’s a nice tribute to him that features the recollections of his parents, siblings and wife, as well as such friends as Brian Doyle-Murray, Chevy Chase, Lorne Michaels, Paul Simon, Jack Nicholson, Anne Beatts, John Landis, Duck Dunn, Ray Charles, Penny Marshall, Hunter Thompson and others.

“Even though he was a bit of a monster, he was our monster, as well as a damned good person you could count on for help in the dark times,” says Thompson.

The entire issue isn’t devoted to him, though. Other articles focus on Joan Jett, whose “I Love Rock ’n Roll” had recently hit the top of the singles charts; independent labels, Jimmy Webb, concerts on cable TV, the plane-accident death of Ozzy Osbourne guitarist Randy Rhoads, the Waitresses, Teddy Pendergrass and AM stereo.

There’s also this preview of the future: A company called Video Corporation of America was planning to roll out 300 to 500 video-rental kiosks by the end of the year. (One hopes they got their due from Redbox.) 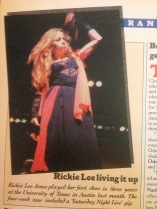 2) Rickie Lee Jones – “Woody and Dutch on the Slow Train to Peking.” In July 1981, Rickie Lee released the follow-up to her classic 1979 self-titled debut: the equally classic Pirates, which is home to “We Belong Together” and this song, among others. She didn’t tour in support of the album, however, until early 1982, as this Random Notes mention indicates.

This incomplete clip (no video, just sound) is from her stop in Philly that year. (I was a fan, but I wasn’t there – wouldn’t see her until 1989.) Decades later, Diane and I saw her at a mesmerizing show at Temple University, where she played her first two albums in their entirety back-to-back. Another favorite show: 1994 at the Keswick Theater, when she delivered a spellbinding set of her songs by her lonesome. (This Inquirer review really got it wrong.)

3) Joan Jett – “I Love Rock n’ Roll.” Joan Jett Has the Last Laugh, reads the title of the article about the 23-year-old Jett, which basically relates her not-quite-overnight success. “[K]udos in excelsis are due to Jett herself, who has managed to combine the punch of heavy metal with the adrenalin of New Wave—and make America like it.” 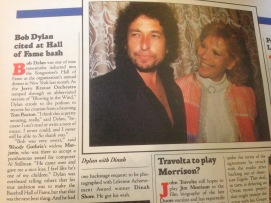 4) Bob Dylan – “Jokerman.” Dylan wouldn’t release Infidels until October. Early in the year, though, he was inducted into the Songwriters Hall of Fame: “As the Jerry Kravitz Orchestra romped through an abbreviated version of ‘Blowing in the Wind,’ Dylan strode to the podium to receive his citation from a beaming Tom Paxton. ‘I think this is pretty amazing, really,’ said Dylan, ‘because I can’t read or write a note of music. I never will be able to. So thank you.’” The short piece ends with this: “And he had one backstage request: to be photographed with Lifetime Achievement Award winner Dinah Shore. He got his wish.”

This “Jokerman” clip is from Dylan’s 1984 performance on Late Night With David Letterman.

5) The Jam – “A Town Called Malice.” The top-selling album this month was the Go-Go’s Beauty and the Beat – a classic through-and-through. Other hot albums include (#2) Vangelis’ Chariots of Fire soundtrack,(#3) J. Geils Band’s Freeze-Frame, (#4) the Police’s Ghost in the Machine and (#5) Joan Jett’s I Love Rock ’n Roll. New albums fresh to the charts include (#21) Rick Springfield’s Success Hasn’t Spoiled Me, (#22) Quincy Jones’ The Dude, (#36) Willie Nelson’s Always on My Mind, (#40) Asia’s self-titled debut, (#46) XTC’s English Settlement and (#58) the Jam’s The Gift, which I bought a month or two later, after seeing the video for “A Town Called Malice.”