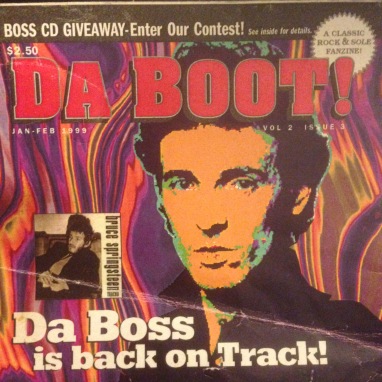 Da Boot! was an excellent idea: a fanzine devoted primarily to collector CDs, which were all the rage in the 1990s. Just as I reviewed bootleg CDs on my old website, we aimed to do the same in print, vowing to separate the wheat from the chaff. Myself and the two other principles, plus my wife Diane, leveraged my website, which attracted more than 100 eyeballs every day, and what might best be called pre-social media (i.e., mailing lists, for anyone who remembers them), and pushed our subscribers from none to 100 or so  – at $11.25 for six issues – within a few months. (Old copies sometimes appear, alone or in bunches, on Ebay, believe it or not. Here’s a recent example.)

Most folks likely signed on because of our initial inducement, which promised the first 60 subscribers true collector CDs – radio shows, such as King Biscuit Flower Hour or Reeiin’ in the Years. International CD, which was run by the CD-store barker I wrote about in Juliana Hatfield’s Bed, Unmade, provided the radio shows in exchange for a few full-page ads. It was a bargain, to say the least – for us, not him. He basically invested, in the abstract, $600. (Legitimate radio shows, back then, routinely sold for anywhere from $10 to $20 a disc, though he likely bought them for a few bucks a pop.)

What initially doomed the venture: the company we worked for was sold, depriving us of our printing press. I.e., we had no overhead beyond buying the CDs we reviewed because we used the company’s color printer and ink. What would have doomed us, anyway: the tectonic forces of CD burners and file-sharing sites, aka Napster and its clones, which reshaped the landscape of the music industry legitimate and illicit. Why buy a $30 bootleg when you can download the same for free? (And sound quality becomes a non-issue, then. If it sucks, so be it; it’s not like you lost money.) Or, better, join a mailing-list “tree” that cost you the price of a CDR and postage. You received a CDR in the mail, made a copy and sent it on to the next person on the list.

What would have doomed it, for me, in the long run: bootlegs were beginning to bore me. That’s grist for another post, though.

Anyway, today’s Top 5 is drawn from the January-February issue of Da Boot!. It sports a cover story on Bruce Springsteen; although we were a bootleg-centric ‘zine, our focus also included legitimate releases, concerts and books – anything collectors that were interested in, basically. 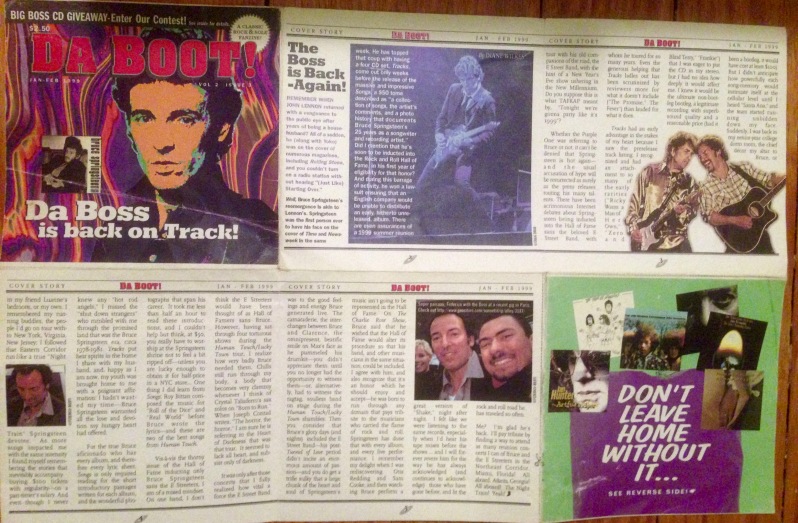 1) Bruce Springsteen – “Frankie.” Diane’s cover story on Bruce goes in-depth into Tracks, the then-recent Songs tome, upcoming reunion tour with the E Street Band, and his soon-to-be induction into the Rock and Roll Hall of Fame. Diane writes: “Vis-a-vis the thorny issue of the Hall of Fame inducting only Bruce Springsteen sans the E Streeters, I am of a mixed mindset. On one hand, I don’t think the E Streeters would have been thought of as Hall of Famers sans Bruce. However, having sat through four tortuous shows during the Human Touch/Lucky Town tour, I realize how very badly Bruce needed them. Chills still run down my body, a body that becomes very clammy whenever I think of Crystal Taliaferro’s sax solos on ‘Born to Run.’ When Joseph Conrad writes ‘The horror, the horror,” I am sure he is referring to the Heart of Darkness that was that tour.” 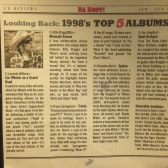 2) Lucinda Williams – “Joy.” My Album of the Year for 1998 was Lucinda’s Car Wheels on a Gravel Road. Small surprise, I suppose, but it also leads this article, which recaps the Top 5 Albums of 1998 as chosen by me and a few others. I wrote: “In years to come, folks will write about Car Wheels with the same reverence that they do for such genre-busting albums as the Byrds’ Sweetheart of the Rodeo or Steve Earle’s Copperhead Road—it’s that good, if not better. Delivering a platter of sensual confessions (“Right in Time”) and sinewy, guitar-driven jousts (“Joy”), Lucinda offers a stew of sublime, superb and incredible songs, tasty morsels all. This isn’t just the best album of the year—it’s one of the best albums of the decade, period.”

3) Emmylou Harris – “Prayer in Open D.” Emmy’s live Spyboy was a runner-up for Album of the Year honors, as the article above shows. I wrote: “Her voice shimmers across a foggy lake, a virtual beacon for lost souls to follow. Emmylou flies high on this deft collection of songs spanning her career, from ‘My Songbird’  to ‘Where Will I Be,” the keynote track off 1996’s atmospheric studio foray Wrecking Ball.” “Prayer in Open D” is one of my favorites by her. It hails from her overlooked 1993 Cowgirl’s Prayer album, but she played it with the Spyboy band, too, and it’s on the Spyboy album. It’s a classic. 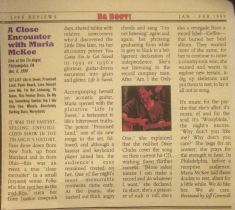 4) Maria McKee – “Breathe.” The Little Diva’s 1998 stop in Philly is one of the first concerts that comes to mind when I think back on the many shows I’ve attended. Diane and I were literally an arm’s length away from her; and it was, suffice it to say, an absolutely stunning show. Anyway, I reviewed it in this issue. “It’s music for the psyche that she’s after,” I wrote. “It’s music of and for the soul.” I’d quote from it a bit more, but I mined this review for a semi-recent Of Concerts Past post. This song, which she performed that night, dates to her solo debut in 1989 and the clip comes the same basic time frame, when she appeared on USA’s Night Flight show. 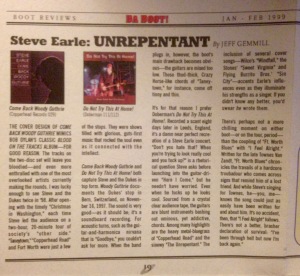 5) Steve Earle – “Fort Worth Blues” & “I Feel Alright.” I reviewed two Steve Earle bootlegs: Come Back Woody Guthrie, on Copperhead Records, and Do Not Try This at Home!, on Doberman. Of the former, I wrote “[T]he guitars are mixed too low. Those thud-thick, Crazy Horse-like chords of ‘Taneytown,’ for instance, come off tinny and thin.’ Of the latter, I wrote: “Sourced from a crystal-clear audience tape, the guitars are blunt instruments bashing out ominous, yet addictive, chords.” Later, I spotlighted the set’s heart: “There’s perhaps not a more chilling moment on either boot—or on the tour, period—than the coupling of ‘Fort Worth Blues’ and ‘I Feel Alright.’ Written for the late Townes Van Zandt, ‘Fort Worth Blues’ chronicles the travails of a hardcore troubadour who comes across signs that remind him of a lost friend. And while Steve’s singing for Townes, he—you, me—knows the song could just as easily have been written for and about him. It’s no accident, then, that ‘I Feel Alright’ follows. There’s not a better, brasher declaration of survival: “I’ve been through hell but now I’m back again.” 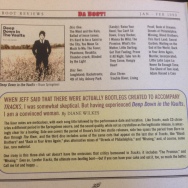 6) Bruce Springsteen – “The Promise.” Diane digs into the three-CD Deep Down in the Vaults bootleg. “When Jeff said that there were actually bootlegs created to accompany Tracks, I was somewhat skeptical. But having experienced Deep Down in the Vaults, I am a convinced woman.” She closes with: “[It] doesn’t have the omissions that critics bemoaned in Tracks. It includes ‘The Promise,’ and ‘Missing.’ Even so, I prefer Tracks, the ultimate non-bootleg boot.” (“The Promise” eventually surfaced on the one-CD 18 Tracks, released in 1999, and again on the 2010 Darkness on the Edge of Town companion album The Promise, which gathered alternate versions and unreleased songs from the Darkness sessions.)