September 1983: I was 18, attended Penn State’s Ogontz campus, lived at home and worked part-time as an usher at the Hatboro Theatre, a single-screen movie (not-quite) palace that was torn down the following year to make room for a Wendy’s.

At the start of the month, the Eurythmics ruled the charts with “Sweet Dreams (Are Made of This)”; and Billy Joel held the top spot with “Tell Her About It” by its end. Popular films included Mr. Mom, National Lampoon’s Vacation, Risky Business, Cujo and Easy Money.

I also bought this issue of Musician. Prince is on the cover, and there’s an in-depth interview with him inside, but I bought it because of the name below his: Joan Jett.

Anyway, at that point, Prince was still riding high on the success of 1999, which had been released the previous October, but the Q&A (by Barbara Graustark) is about much more than that double-LP set. It delves into his early years, rocky relationship with his dad and entry into music, as well as the esoteric subjects of the songs themselves.

“I think I change constantly, because I can hear the music changing,” he says. “The other day I put my first three albums on and listened to the difference. And I know why I don’t sound like that anymore. Because things that made sense to me and things that I liked then I don’t like anymore. The way I played music, just the way I was in love a lot back then when I used to make those records. And love meant more to me then—but now I realize that people don’t always tell you the truth, you know? I was really gullible back then. I believed in everybody around me. I believed in Owen [Husney, his first manager], I believed in Warner Bros., I believed in everybody. If someone said something good to me, I believed it.”

Musician: I liked your first two albums, but it seemed to me that the third record, Dirty Mind, was really a growth.

Prince: Yes, the second record (For You) was pretty contrived. After the first record, I put myself in a hole, because I’d spent a lot of money to make it. With the second record, I wanted to remedy all that, so I just made it a “hit” album. I usually write hits for other people, and those are the songs I throw away and don’t really care for. Dirty Mind started off as demo tapes; they were just like songs inside that I wanted to hear. So I took it to my manager and he said “This is the best stuff I’ve heard in a long time. This should be your album.” The drag is that I don’t know how I could make another album like that. I usually change directions with each record, which is a problem in some respects, but rewarding and fulfilling for me. I have mixed emotions.

Prince: It depends a lot on what instrument I write on. When I write on guitar, I come up with songs like “When You Are Mine” and “Ronnie Talks to Russia.” When I start with drums, I get “Controversy.” Controversy is a little erratic. I’m really proud of this new album (1999). 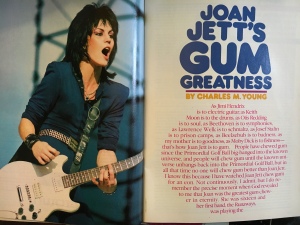 2) Joan Jett & the Blackhearts – “Fake Friends.” Charles Young has an excellent profile of former Runaway Joan Jett that, among other things, delves into her gum-chewing prowess: “‘I like to make a lot of noise and blow bubbles,’ chews Joan, now twenty-three and still fully cognizant cool. ‘It’s a good way to clear out sleeping space on airplanes.'” Of her old band, she says: “We were just a good band that wanted to have a good time onstage. What were all those other groups singing about? They didn’t have to answer those naive questions: ‘Oh my God, this is your career? What are you going to do if you find the right boyfriend? Will you dump your career?’ Well, not me. When I listen to our old records or read old articles, I still don’t understand what got people so uptight. They were afraid we’d rob their houses or kill someone.”

Of this song she says, “I think ‘Fake Friends’ is not so much about anger as a show of disgust. It’s not a big deal to lose fake friends, people who just tell you what you want to hear. You don’t have to be in rock ’n’ roll to understand that.”

3) Joan Jett & the Blackhearts – “The French Song.” In addition to the Young piece, there’s a review of Jett’s third album, simply titled Album, by one R.J. Smith, who summarizes it as “better than Wayne Newton, gravel in a Maytag, and is frequently the equal of Jett’s two earlier records.. It shows her uneasily accommodating to her arena-sized success. But if the record’s an on-again, off-again rumbler, it frequently bangs about with the glory of a buffalo padding down Park Avenue.” Later, he observes that “[t]he production terraces the sound on Album in surprising ways. On ‘The French Song,’ for instance, half the chorus soothes like a Stevie Nicks velvet glove, just before the rest of it interrupts with a punch.”

He concludes with: “‘I am what I am,’ Jett growls in ‘The French Song,’ like Popeye immediately after a green fix. And what she is comes into focus on Album: not the dedicated fan of I Love Rock ’N Roll, but a professional who knows it’s too late to turn back now. For the first time, it’s her original material and not the covers that carries the day. She has to think harder about what to do next, in the wake of her chart-topping success. Album isn’t a full answer. Still, it provides more than enough reasons for waiting around until she tries again.”

4) Kate Bush – “Sat Into Your Lap.” In June 1983, EMI release a five-song EP to help introduce Kate to us Americans. It featured two tracks from The Dreaming, including this one.  J.D. Considine first raves about the cleaner sound for the tracks lifted from The Dreaming. It “makes it easier to absorb the layers of detail Bush packed into “Sat Into Your Lap” and “Suspended in Gaffa.” The rippling rhythms of “Sat” are far more effective when you can hear them all, and the nuances of Bush’s vocals stand out impressively. But at the same time, the sonic clarity also shows up just how much of Bush’s handiwork is gimmickry and how little is magic.” He also equates “Babooska” with an “elementary school Christmas pageant,” and concludes with “[a]fter The Dreaming suggested that Kate Bush was both daring and different, this record seems to show that she’s really pretty much the same as any other over-ambitious chanteuse.”

5) The Plimsouls – “A Million Miles Away.” J.D. Considine is much nicer to the Plimsouls, one of the great lost L.A. bands of the ‘80s (and featured to great effect in the classic Valley Girl film): “Now here’s a garage band that has come to terms with its time. Even though producer Jeff Eyrich has slicked up the Plimsouls, tightening the arrangements and turning ‘A Million Miles Away’ into mainstream hit material, he’s left the band’s drive and bite intact. So not only are the Plimsouls able to make the most of their smarts, as on Peter Case’s ‘Shaky City,” they also enjoy the luxury of sounding dumb, as on the grimy ‘Lie, Beg, Borrow and Steal.'”