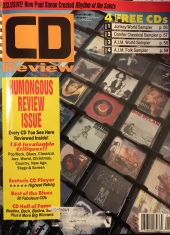 Years long ago, we had a 5-CD Sony player hooked into a receiver with a double-cassette deck, the brand of which escapes me now. Good speakers. No turntable, as by then (1991) we – like many folks – had moved full-force into the age of the shiny platter. What I loved about that system was this: fading in or out when making a mix tape. I could open a tape with, say, a minute-long rendition of “Drift Away” by the 10,000 Maniacs, lifted from the 1994 In the Garden of Eden bootleg, where it tracked with “Hey Jack Kerouac”; and close the side with the Beatles performing a ragged version of “Rainy Day Woman #12 & 35” during their Get Back sessions, the audio verité manner of the bootleg it hailed from (Songs of the Past Vol. Whatever, I believe) making it part of a track longer than the 1:10 it actually is.

The 5-CD platter was an even better feature. Diane and I chose two discs each, agreed on a third (or flipped a coin), hit shuffle and…away the night would go, the two of us obsessively playing any of a number of games – Acquire was quite the habit for a time. Trivial Pursuit was another. We had good friends in South Philly – usually we’d go to them, as they had a dog (and lived close to Nick’s, which had the best hot roast beef sandwiches in the region); occasionally they’d come out to us, though if they did the night never went on quite as long, as they had someone who needed tending. Regardless, a good time was always had.

I’m getting ahead of myself by a few years. What can I say? Time flies; and memories intermingle. The point I was going for: In the pre-Internet age, information wasn’t a few mouse clicks away. Life was slower. If you watched TV, you watched – no “second screen.” If you listened to music, you might do something else – read a book or magazine, play a game, etc. But, often, you (or I) just listened. And for information on music – the local newspaper might have a weekly column about it but, really, fans were reliant on magazines, including Rolling Stone, Record, Spin, Creem and Circus, along with a slew of fanzines. By the late 1980s, two additions were added to my menu: ICE, the International CD Exchange, which was more of a newsletter; and Digital Audio and CD Review, which went in-depth into digital gear and CD sonics.

The reason for those last two: Not everything on vinyl was available on CD. And some that was, well, let’s just say the sound quality was lacking. The first few Byrds releases on compact disc, for instance, sounded like the master tapes had been put through a blender. Likewise, Simon & Garfunkel’s Collected Works came from second-generation masters because Columbia lost the originals. The result sounded okay, but it’s not as good as, say, the re-reissues from a few years back, which were redone from tapes one step closer to the source.

Anyway, at some point, Digital Audio and CD Review dropped the first three words of its title. CDs were graded for both artistic and sonic elements, though the reviews themselves often said little about the audio quality.

1) Rosanne Cash – “What We Really Want.” Holly Gleason opens up her review of Rosie’s 1990 release, Interiors, with: “Rosanne Cash never has been one to be content with just wearing her heart on her sleeve. She also puts her anxieties, misgivings, and rage out there—and it’s made her one of the most honest, affecting artists of any genre of the ‘80s.

“Consequently, it should come as no surprise that Interiors, Cash’s first disc of the new decade, is the kind of work that digs out the truth no matter how painful. Filled with moments of faltering and self-doubt, she paints herself and those around her in often fading light, struggling for the truth, often coming up short and continuing in spite of the odds.”

She sums up the CD with an apt comparison: “Like Joni Mitchell’s classic Blue, Interiors yields to catharsis. Sensual without being sexual, there’s a revelation at every turn and hope in the face of devastating interpersonal realities.”

To my ears, it’s one of the greatest singer-songwriter albums of all time. And this song is as true today as it was then.

2) Emmylou Harris – “Tougher Than the Rest.” Holly Gleason also tackles Emmy’s 1990 Brand New Dance album: “[S]he follows the brave new path of eclecticism she began staking out on 1989’s Bluebird. Once again Harris challenges her listeners, offering them something other than obvious hooks and cheap instrumental fills. Instead, producers Richard Bennett and Allen Reynolds have built an album on thoughtful playing and songs that work from the inside out, which yields a work that fairly resonates with raw beauty. For instance, Bruce Springsteen’s “Tougher Than the Rest” is chilling in its contrast of the song’s sentiment and the softness of the track.”

3) Kathy Mattea – “A Few Good Things Remain.” In the late ‘80s and early ‘90s, Mattea was on a roll, hit after hit, and racking up ACM, CMA and Grammy awards. Diane and I saw her two or three times in that span at the Valley Forge Music Fair – she always put on a good show.

Anyway, going for the trifecta, Holly Gleason also reviews A Collection of Hits, Mattea’s first greatest hits set. She writes, “Given her second Country Music Association award for Female Vocalist of the Year, it would be almost di rigueur for Mattea to continue to follow her pre-defined musical path. Instead, she broadens her lyrical horizon with a track recorded in 1990, ‘A Few Good Things Remain,’ an exceptionally mature song that has a deeply personal quality to it.”

4) Carlene Carter – “I Fell in Love.” Carlene, the daughter of June Carter and stepdaughter of Johnny Cash, has had her fair share of ups and downs in her personal and professional lives, but when she’s on – as on I Fell in Love – well, she’s just plain great. Reviewer David Okamoto says that “[l]ike 1980’s Musical Shapes, I Fell in Love is a country album performed by roots-conscious rockers. Howie Epstein—bassist for Tom Petty’s Heartbreakers—produced this playful disc, co-wrote two songs and recruited fellow Heartbreaker Benmont Tench plus Dave Edmunds, David Lindley, Albert Lee, Levon Helm, and James Burton to help out. Together with the sturdy rhythm section of drummer Ed Greene and bassist James Ciambotti, they lend a loose, infectious energy to these 11 songs that rarely comes across on today’s overpolished country discs.”

5) Richard Hell & the Voidoids – “Blank Generation.” Paul Robicheau explains that “Blank Generation has been reissued on compact disc (with a booklet of informative liner notes as well as lyrics), a dated but delightful rock nugget to pick up—especially if you’ve never heard it before.” True, that.

He sums up with: “With all due respect to the Voidoids’ itchy but incisive musicianship, it was Hell’s clever, cavalier lyrics that gave the group its real spark. An aspiring poet, he was firmly committed to indifference; ‘Blank Generation’ and ‘Who Says (It’s Good to Be Alive)’ are testaments to his cynical stance. But Hell’s tongue is firmly in cheek and his delivery even campy, especially when his vocals go gloriously off key on slower tunes like the pseudo-waltz ‘Betrayal Takes Two’ and a perfectly lame, jazzy cover of Frank Sinatra’s ‘All the Way.'”

… here are the portions of the reviews that I didn’t include above. (As with most images on my blog, clicking them pulls up a far larger pic.)