1974 was a bad year. Leave aside, for a moment, the horrors of Watergate and Richard Nixon, which culminated on August 9th with that wretched excuse of a president tendering his resignation. The economy was in tatters. At year’s start, unemployment clocked in at 5.10 percent – not bad, but it was on an upward trajectory to, by year’s end, 7.2 percent. Inflation, too, was spiraling upward. It began the year at 9.4 percent and surged to 11 percent by December.

There were many reasons for the turmoil; this 1974 end-of-year report by the Federal Reserve Bank of Minnesota, aptly titled “The Limping Giant,” does a good job of explaining them.

In the months between Nixon’s resignation and this September 26th issue of Rolling Stone, new president Gerald Ford pardoned Nixon and offered a conditional amnesty to draft dodgers; and, in related news, Evel Knievel failed in his attempt to jump Snake River Canyon.

According to Weekly Top 40, the No. 1 song this week was Barry White’s “Can’t Get Enough of Your Love, Babe”; and, according to Billboard (via Wikipedia), the No. 1 album was Stevie Wonder’s Fullfillingness’ First Finale. Top TV shows included All in the Family, Sanford and Son, Chico and the Man, The Jeffersons and M*A*S*H. The year’s top films included Blazing Saddles, Young Frankenstein, The Godfather Part II and The Longest Yard.

Not that I saw any of them at the time. I was all of 9 years old that fall and just starting fourth grade. As I’ve written here, here and here, at the time we lived overseas – in Saudi Arabia, one of the countries responsible for the oil embargo that had helped stall the already sputtering U.S. economy the year before. I liked music, but had yet to become obsessed with it, though Johnny Horton’s Greatest Hits got a lot of play on my portable Sanyo record player.

I’d never heard of Tanya Tucker, the country singer whose face graces this Rolling Stone, and wasn’t familiar with any contemporary singer except Neil Diamond, though distinct memories of some songs – “Doctor My Eyes” and “Bennie and the Jets” especially – bounce about my brain from time to time. I’m sure I was exposed to popular music, in other words, but it wasn’t where my attention was fixed.

Anyway, Tanya – who I discovered in 1978 with her incendiary TNT album – first found success in 1972, at the age of 13, with her rendition of “Delta Dawn,” which she recorded after either she or producer Billy Sherrill heard Bette Midler sing it on The Tonight Show. (Different stories abound.) She sounded older than her years.

Titled “Tanya, the Teenage Teaser,” the Chet Flippo-written profile catches up with Tucker at the Fifth Annual Altoona Fire Fighters Show in Altoona, Pa., where her rendition of Elvis Presley’s “Burning Love” apparently sparked flames of lust in the male folk. “Her face was a study in wide-eyed childish innocence, but her body had another message and her knee drops and pelvic thrusts raised the temperature several degrees around the stage,” Flippo writes.

The article was likely Tucker’s introduction to many Rolling Stone readers; it delves into who she is, both as a person and an artist, and explains that “[s]he has had five Number One country hits in two years, including ‘Delta Dawn,’ ‘Blood Red and Going Down,’ and ‘Would You Lay with Me (in a Field of Stone).’ She has Nashville’s top producer, Billy Sherrill—his other major artist is Charlie Rich—working for her. She has limitless ambition and energy, complete backing from her family and a powerful, instantly identifiable voice —low, brassy and vibrating, like a country Ste. Marie. And she has a natural stage presence that is all things to all people.” 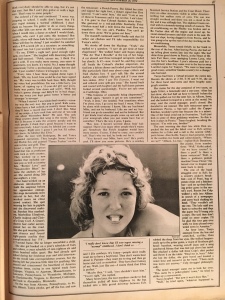 In the article, she acknowledges that “[p]eople say I act older and look older and talk older and sing older, but I don’t know. You don’t find many 15-year-olds with a strong voice. To me—I think everybody should be able to sing, but it’s not that easy. Just like I can’t play guitar or walk a high wire. That’s easy to some people.” Later, she also says “I don’t want to be labeled just a country singer. Right now I guess I am but I’d rather, you know, be labeled like Elvis.”

1) Tanya Tucker – “Would You Lay With Me (in a Field of Stone).” Her rendition of the David Allen Coe-penned classic apparently didn’t go over well with some because of her young age. “An executive of another record company told me that if you were one of his acts he’d stop having you record what he called ‘scurrilous’ songs,” Flippo tells her. 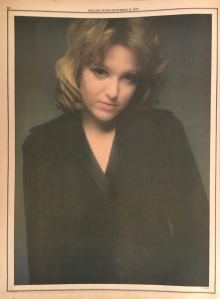 “‘Well,’ she huffed, ‘people get the wrong ideas. Like I had an interview in New York City the other day and the guy was an older man and he asked me to name my songs and I said ‘Would You Lay With Me in a Field of Stone,’ and he said, ‘What? You’re 15 and you sing songs like that?’ I said, you don’t even know nothin’ about it—you haven’t even heard the song, that’s just like judging a book by its cover. I gave him the record and he called me the next day and said, ‘I liked you when I interviewed you but now I love you.’

“‘I think I’ll use that song for my wedding vows. There’s not much love like that hangin’ around. You don’t find it on every street corner. But some people would like to try to tell me what I should and should not sing….I think two radio stations wouldn’t play ‘Lay with Me.’ So—I just think their minds were in the gutter, they were thinking bad, not me. Some people are always gonna take anything you say dirty. But we don’t need them anyway. We sold 300,000 copies.’”

2) Stevie Wonder – “Creepin’.” The review section spotlights a few major releases, including Stevie Wonder’s Fullfillingness’ First Finale, which – as I noted above – was the No. 1 album this week. Ken Emerson writes that “FFF concerns the love of God. Wonder’s faith has become more inner-directed and otherwordly, less easily threatened by the here and now. ‘Heaven Is 10 Zillion Light Years Away’ but Stevie Wonder can feel God within him, despite His seeming absence from the contemporary scene.” Later, Emerson observes that “FFF is less funky, less specifically black than its predecessors. For Wonder’s onward and upward development has consistently been away from strict soul music and racial categories or limitations. Because of this, his appeal – greater than that of almost any other performer today – cuts across social and racial barriers.”

His conclusion: “The album explores rich harmonies with splendid results, particularly the duet with Wonder’s protégée, Minnie Riperton, on the slinky ‘Creepin’.’ The refrain is ‘in my dreams.’ FFF succeeds in making Stevie Wonder’s dreams seem attractive and real.” 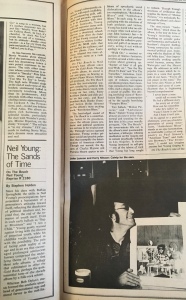 3) Neil Young – “Revolution Blues.” Stephen Holden tackles Neil’s classic On the Beach: “The hard-edged sound of On the Beach is a contributing factor to its greatness, since the album poses aesthetic and political questions too serious to be treated prettily. Through various opposed personae, Young evokes primary social and psychic polarities that exemplify the deterioration of American culture. Though not named, the figures of Charles Manson and Patricia Hearst appear as emblems of apocalyptic social dislocation in the album’s two masterpieces, ‘Revolution Blues’ and ‘Ambulance Blues.’ In each song, by empathizing with the emotions of both predators and victims, Young has dared what no other major white rock artist (except John Lennon) has—to embrace, expose and perhaps help purge the collective paranoia and guilt of an insane society, acting it out without apology or explanation.”

4) Harry Nilsson – “Black Sails.” Ken Barnes says of Pussy Cats: “On his new album Harry Nilsson combines the fashionable practice of revamping hits of the past with originals; fortunately the result, though occasionally unsettling, is always entertaining.” He calls this song “the most intriguing new number, with haunting strings and a clever piratical/anatomical metaphor, highlighted by a neat ‘You’re so vain’-like chorus. Nilsson’s lyrics, as usual, are characterized by seemingly offhand but highly adroit wordplay, and tend to overshadow the essentially low-key music. Nilsson’s vocals, unusually, are confined to a limited range, with none of the normal legerdemain, and contrive to sound hoarse.”

5) Minnie Riperton – “Lovin’ You.” Believe it or not, but Mark Vining never mentions the classic “Lovin’ You” in his review of Riperton’s second album, Perfect Angel, which he mistakes for her debut (which was actually Come to My Garden in 1970): “Even Minnie Riperton’s octave-bounding, quietly commanding voice can’t keep her debut solo album from losing some of its radiance after a week or two of play.” He concludes with: “Perfect Angel is sometimes subtly fine within its set boundaries but a stronger, more varied production would draw out the hidden color and zest in her voice.”