I came across this CDR tucked in a box in our basement – a copy of another CDR that I received while a member of a Maria McKee email discussion group sometime in the…late ‘90s, I believe. It came with cover art created by whoever initiated the “CD tree”; you can see his (or her) original on this 45worlds.com page. I don’t believe it was ever a store-sold bootleg, just a fan-generated creation. He (or she), or a friend, snuck a tape recorder into this specific show, which is from the Bayou Theater in Washington, D.C., in 1989.

As I said, though, this particular CDR is my copy of the original, and dates to the early 2000s. In those pre-iPod days, I frequently made CDRs for the car and, for a time, also created the covers for them. Sometimes, just as whoever created the original artwork for the set, I snagged a picture off the ‘net and added the track list, such as with the Juliana comp I blogged about a while back. Other times, though, I used Paint Shop Pro to tinker with the image and/or create collages – it was a fun thing to do. And, too, as in this case, I powered up Poser and Bryce, 3D-image creation programs that I played around with at the time, and tried to develop something totally unique. 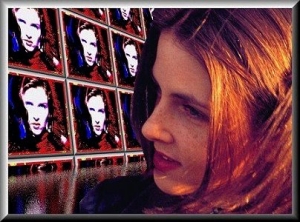 Of note, my image includes a picture lifted from a Kiss the Stone bootleg titled Breathe, which preserved a 1994 concert from somewhere in Europe, that I used on my old website for a time. I scanned the cover, loaded it into Paint Shop Pro and splashed color here, there and everywhere, and then cut out a picture scanned from one of Maria’s CD singles. I created a wall in Bryce, tiled the image and placed a reflective surface “water” in front, then positioned the cutout. The final image took hours to render. And I do mean hours. Reflections always added a wait-and-pray (that the computer doesn’t crash) drama to the process, given that mine was underpowered for the task. (You can see the original Breathe cover here.)

All of which leads to this: I also encoded the versions of “Shelter,” “Breathe” and “Into the Mystic” from the performance onto my computer’s 20-gig hard drive as “high” bit-rate MP3s: 192kbps. Maria’s rendition of all three were spellbinding.

My hope had been to feature five tracks from the show itself, but since only two are (apparently) on YouTube, I’ve expanded the theme to include all of 1989.

1) “Into the Mystic” – From the Bayou Theater in Washington, D.C.

And two bonuses in one: