The first week of January 2018 has been accented by frigid temperatures across much of the nation. In the Delaware Valley, we’ve “enjoyed” highs in the teens, and windchill temps clocking in the single digits. On this day in 1983, however, it felt positively balmy: We hit a high of 55.

I covered this month before via Trouser Press; and the previous month via Record magazine. The most important thing to know: Unemployment topped 10 percent for the fifth month in a row. The Reagan Recession, in other words, was in full swing.

But, as I mentioned in that Record magazine recap, you wouldn’t have known it by me. I was 17, a high-school senior, and concentrating on my studies. And although far from a math wizard, I could count – which explains why I worked inventory at the Abraham & Straus department store at the Willow Grove Park Mall as a temporary employee this month. (In a few years, I’d sign on at the same store as a sales associate.) I also had plenty of Christmas cash courtesy of my great aunts and uncle, and used much of it to expand my cassette collection – a necessity, as I’d received a Sanyo Mini AM/FM Stereo Radio Cassette Recorder for Christmas.

On January 3rd, a Monday, I picked up Neil Young’s Trans and Lou Reed’s The Blue Mask. In a few months, I’d also pick up Trans on vinyl; as I’ve said elsewhere on this blog, I assumed store-bought cassettes possessed better sound than recorded copies of LPs. (In retrospect, I wish I’d gone the home-taping route and used the extra cash to buy other albums.) Of The Blue Mask: “Waves of Fear” quickly became a favorite track: 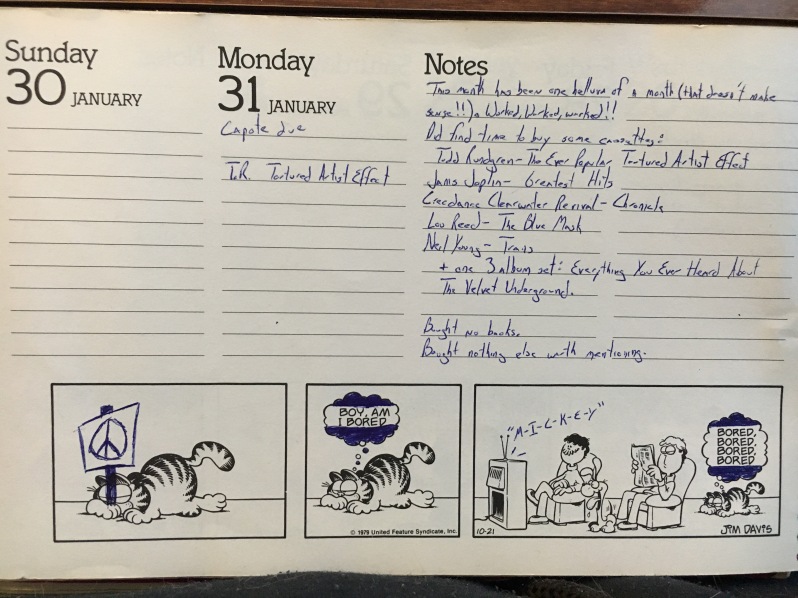 Anyway, as my Garfield desk diary reveals, the month’s other purchases included cassettes by Creedence Clearwater Revival, Janis Joplin and Todd Rundgren; and a way-cool three-LP Velvet Underground set. I also received, via the RCA Music Club, five of the six tapes I’d ordered the week after Christmas; I already owned Stevie Nicks’ Bella Donna and Pete Townshend’s All the Best Cowboys Have Chinese Eyes on vinyl, but Eagles Live, Glenn Frey’s No Fun Aloud and Fleetwood Mac’s Tusk were new to me.

One album that I inexplicably left off of that end-of-the-month summary – Van Morrison’s Moondance, which came into my life on Friday the 7th. It’s still one of my favorite Van albums.

One other notable event this month: on the 21st, I ventured into Philadelphia to see A Clockwork Orange at the TLA on South Street.

1) Hall & Oates – “Maneater.” For the fourth week in a row, the No. 1 song in the land was this catchy hit from the Philly pop-soul duo.

2) Michael Jackson & Paul McCartney – “The Girl Is Mine.” The lead single from MJ’s classic Thriller was this syrupy confection, which was the week’s No. 2 single.

5) Marvin Gaye – “Sexual Healing.” Entering the top 5 this week is this latter-day classic from Marvin Gaye, who was in the midst of a comeback. (His last hit had come in 1977, when “Got to Give It Up” topped the charts.)

6) Golden Earring – “Twilight Zone.” The Dutch group’s “Radar Love” is (rightfully) considered one of the greatest driving songs of all time, but this “powerplay” track – which jumped from No. 52 to 50 this week – is their lone Top 10 U.S. hit. (I’ve featured this song before, of course, in my March 1983 rundown.)

7) Dire Straits – “Industrial Disease.” After the success of 1980’s Making Movies, Mark Knopfler & Co. stretched out on Love Over Gold, a full-length LP with just five songs (including the 14-minute “Telegraph Road”). This satiric tune, which entered the charts at No. 86 this week, was the album’s shortest entry at 5:50.