In preparation for my forthcoming review of Neil’s latest archival release, Roxy: Tonight’s the Night Live, I’ve been digging through my own archives with a few reviews from the original Old Grey Cat website. (For the first entry, go here.) This one is for a bootleg CD called Sunset Strip on a label called Rough Kut Trax – and an appropriate label name it is. As I explain in the review below, the sound is decidedly rough…

(The review itself dates from sometime in the late ’90s. I can’t narrow it down any more than that, unfortunately – the files themselves are dated from when I archived the website in 2005, not when I wrote them.) 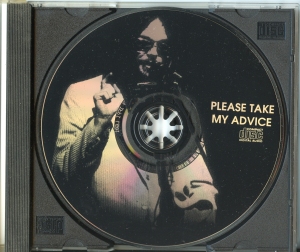 The Review: “Don’t fuck around. Get drunk…I’m actually staying very straight for this show because I don’t want to get too loose, you know.” In a nutshell, that’s 1973, one of the – if not the – decisive years in Neil’s career. Neil definitely had a yin-yang thang going…sloppy renditions of great songs, right? Maybe. Maybe not. In fact, the Old Grey Cat is of the opinion that the “sloppy” playing actually reinforces the songs. It’s part of a larger whole. There’s more to the picture than meets the eye, in other words, and in this instance that means “mood.”

Taken from what’s said to be the late show on Sept. 22, 1973, the third night of a four-night, eight-show run at the then-brand spanking new Roxy Theater in Los Angeles, it presents Neil’s “Miami Beach” vision in its nascence, he and the Santa Monica Flyers performing a solid and oft-inspiring set that, like Rock ‘n’ Roll Can Never Die, is stronger than the Tonight’s the Night acetate found on the Broken Arrow boot. One high: Nils Lofgren’s solo on “Speakin’ Out.” Another: the mellow “New Mama,” which is part and parcel of the yin-yang theme that permeates the entire Tonight’s the Night acetate, tour and eventual album. Life and death go hand-in-hand, you know.

Unfortunately, as a CD, Sunset Strip does suffer from some serious flaws. First and foremost, the sound is not what most neophytes would term acceptable. At times, the music crackles and threatens to break up – well, it does break up but, still, it’s listenable…maybe only for someone like me who thrives on Tonight’s the Night-tour sets, though. Let’s put it this way: I’ve heard much worse recordings from that tour and enjoyed them, too. Another major flaw: You know the sound some cassette players make when you fast-forward a tape? That squeaky, squished sound that radiates from the speakers like a high-pitched wheeze? You’ll hear that between some of the songs. Neil’s patter isn’t presented in its entirety, in other words, thus stealing from the impact of the performance. In fact, the choppy and incompetent editing is what most mars the CD.

As far as the bonus material, it’s taken from the Time Fades Away tour – March 17, 1973 in Seattle, to be exact, which featured the debut of “Yonder Stands the Sinner.” The performance here of that classic should be familiar, as it’s the same performance which was used for the Time Fades Away album. Soundwise, there is an improvement – but not a drastic one.

This disc is really for those seeking to complement other boots that document the same era.

My thoughts circa tonight (4/26/2018): I’m either a tad generous above regarding sound quality or my standards have substantially increased. I plugged the CD into the CD player and…wow. Just wow. The sound is absolutely atrocious.