Thirty-five years ago today was a Friday and, although a winter’s day, calm and not too frigid in the Delaware Valley. The daytime high soared to 55 degrees (Fahrenheit) before dipping to 26 at night.

The New York Time’s summary of that day’s edition can be found here. A big pop-culture story unfolded after the issue was put to bed, however: While filming a Pepsi commercial that afternoon in L.A., Michael Jackson’s hair caught fire. What else? I recapped February ’84 (via Record Magazine) a few years back, so won’t go too in depth into the economic concerns of the era beyond to say that the early ’80s/Reagan Recession was beginning to ebb.

Beyond that: Cold War worries also kept some folks up at night – as did bad TV. And NBC, in a masterful stroke of programming, married the two in the wretched World War III miniseries, which aired on January 31st and February 1st:

A more major media milestone occurred on Jan. 22, 1984 during Super Bowl XVIII, which saw the L.A. Raiders trounce the Washington squad 38-9. No, not the game, but the debut of Apple’s famous “1984” commercial for the Macintosh personal computer.

The following day, Jan 23rd, another historic event occurred: the Iron Sheik, who’d thumped Bob Backlund for the WWF championship the previous month, lost the coveted title to Hulk Hogan at Madison Square Garden. It was the first step in Vince McMahon’s masterful plan to take the WWF national. 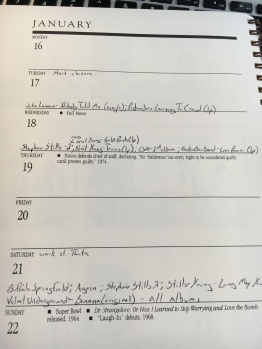 On the personal front: I was 18, attending Penn State’s Ogontz campus in Abington, and working part-time as an usher at the Hatboro Theater, a single-screen movie house that was destined to be demolished by summer’s end. Early in the month, I scored a temporary gig working inventory at the A&S department store in the Willow Grove Park Mall, and that extra cash helped fuel a month-long shopping spree – according to my Doonesbury-themed desk calendar, I picked up 15 albums and one single over the course of those 31 days. Most were purchased at Memory Lane Records, a used-record store in Horsham where the platters were plentiful and prices cheap, but two relatively new releases came either from the Hatboro Music Shop or the Listening Booth at the mall: the Pretenders’ Learning to Crawl and Billy Joel’s An Innocent Man.

As evidenced by the picture, I was knee-deep into all things Crosby, Stills & Nash this month. In other words, I was out of step with the mainstream pop world – and not for the first or last time. 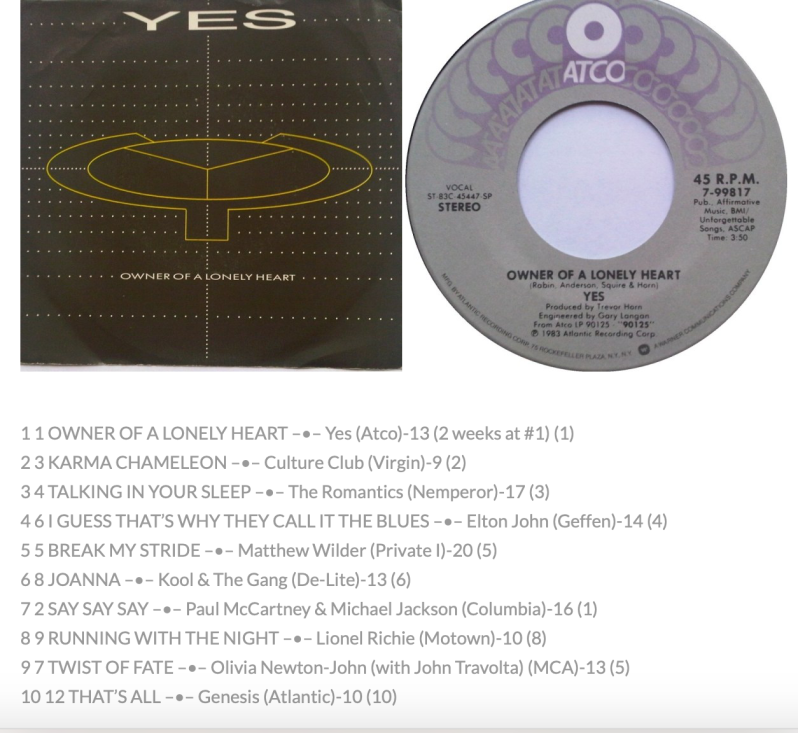 1) John Mellencamp – “Pink Houses.” At No. 12 is this classic populist ode from the Heartland rocker – still one of the greatest such songs.

2) Van Halen – “Jump.” There’s no denying the utter joy of this single and its synth-driven riff, even if it was inspired by a man who was threatening to leap from the ledge of a downtown L.A. building. (“Go ahead and jump” was what Roth imagined people were yelling at him.) The group’s first and only No. 1 single was on its way to the top of the pop chart, rising in one fell swoop from No. 34 to No. 20.

3) The Pretenders – “Middle of the Road.” It’s no surprise that Learning to Crawl was one of the two new LPs I picked up this month. I’d argue that it encapsulates rock’s past, present and future in its four minutes and 15 seconds, but I’m sure others would disagree. Anyway, this week it edges up to No. 21 from No. 25.

4) Nena – “99 Luftbalons.” The success of this song in both its German- and English-language incarnations speaks as much to the Cold War concerns of the era as to its catchy beat. On its way to No. 2, this week it floats to No. 22.

5) The Motels – “Remember the Nights.” Martha Davis & Co. never quite caught on as much as it seemed they might, but they did release a handful of classic tracks. This, the third single from their 1983 album Little Robbers, clocks in at No. 36.

6) Irene Cara – “The Dream.” The theme song from D.C. Cab inches up to No. 39 from No. 41. It follows the “Flashdance…What a Feeling” blueprint – though it doesn’t capture the same euphoria, it’s still a fun listen.

7) John Cafferty & the Beaver Brown Band – “Tender Years.” So the Eddie & the Cruisers movie was based on a best-selling book, and Cafferty & Co. were tapped to provide the soundtrack. The classic E Street Band sound rankled the critics… but also scored them some hits. This week, “Tender Years” debuts at No. 94. It would eventually stall at No. 78 before being re-issued in the fall, when it made its way to No. 31. Here they are on Solid Gold…