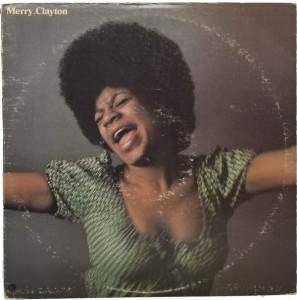 R&B/soul singer Merry Clayton’s name may not be well known, but her vocal prowess is – as documented in the 20 Feet From Stardom film, that’s her singing with Mick Jagger on the Rolling Stones’ “Gimme Shelter.” She was 20 years old at the time of the recording, seven months pregnant and working on little sleep, as she was called into the recording studio in the middle of the night by an apologetic Jack Nitzsche, who was helping Mick and Keith Richards mix the song in L.A.; the Glimmer Twins realized it was lacking that something extra. Enter Merry, so named because she born on Christmas day. She arrived with her hair in curlers, did her thing and then left after three takes. (Sadly, she suffered a miscarriage upon returning home.)

She was far from a neophyte in the music business, as she explains in this 1986 L.A. Times article. Her first turn in a studio came in 1962, at age 14, when she sang with Bobby Darin on his swinging “Who Can I Count On? (When I Can’t Count on You),” which surfaced on his 1963 You’re the Reason I’m Living LP. She later joined the Raelettes, Ray Charles’ backup singers, and also provided backup vocals for everyone from Pearl Bailey to Neil Young.

It was “Gimme Shelter,” though, that opened the door to a recording contract with Lou Adler’s Ode label, and in 1970 her rendition of the song served as the title track for her solo debut, which also featured – among other highlights – tremendous renditions of Simon & Garfunkel’s “Bridge Over Troubled Water” and Van Morrison’s “Glad Tidings.” With a crack session band that included Billy Preston, Paul Humphrey, Joe Sample and David T. Walker, it’s a soulful delight, the kind of disc that demands repeated listens.

That the album failed to chart is one of the mysteries of life. It’s a great set. The history of popular music is littered with lost treasures, of course. But that’s the way the music business has worked since the dawn of time, with some albums and artists seemingly destined to be discovered by succeeding generations.

Released a year later, Clayton’s eponymous sophomore set equals the brilliance of Gimme Shelter and even, I think, surpasses it in spots. A soulful spin on Neil Young’s “Southern Man” opens the album to great effect. The lyrics take on an added poignancy and weight when sung by her.

And her rendition of Bill Withers’ “Grandma’s Hands” may well be the best out there:

There’s more. Far more. (As Diane just said of “Love Me or Let Me Be Lonely,” which was a hit for the Friends of Distinction a year earlier, “this is a great version.”) From top to bottom, this self-titled set from Merry Clayton is just a phenomenal, soulful set. Chart-wise, it did a little better than her debut, making it to No. 180 on the album charts and No. 36 on the R&B charts; and the 45 of “After All This Time” topped out at No. 71 on the pop charts and No. 36 on the R&B charts.

If you’re unfamiliar with Merry Clayton beyond “Gimme Shelter” and Lynyrd Skynyrd’s “Sweet Home Alabama” (another song she sings backup on), give this set – and her debut – a go. 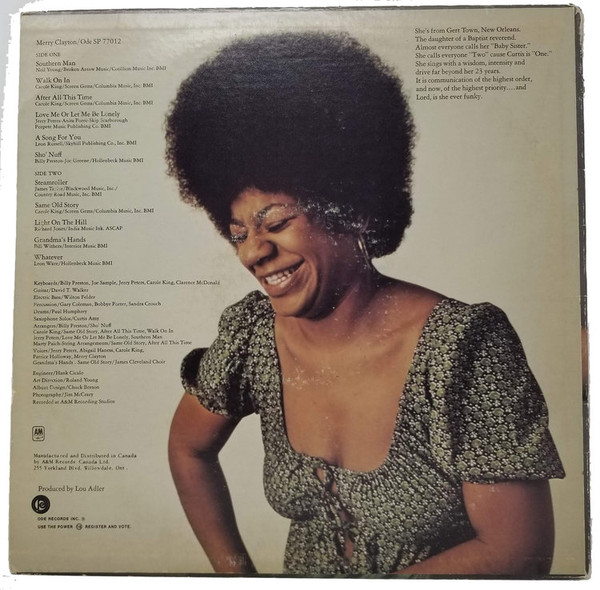