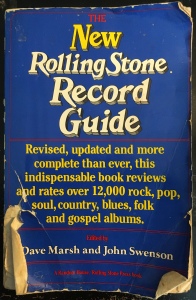 In today’s world, it’s easy to explore an artist’s oeuvre. Pre-Internet, not so much. In my slice of suburban America in the late 1970s and early ‘80s, one had few options for digging into rock ’n’ roll’s past beyond flipping through the racks of the local record stores and checking the song titles on the back of the LPs in hopes that they contained the older song or songs you heard Ed Sciaky play the previous afternoon.

Top 40 radio only played current chart hits, while the AOR stations cherry-picked recent releases that adhered to the rock orthodoxy and programmed them alongside popular platters from the late 1960s onward; the same held true at mellower WIOQ, although its deejays – such as Sciaky – occasionally featured deep tracks from albums past and present. The same closed approach could be found on WPEN-AM, an oldies station I listened to on weekends; it only featured rock ’n’ pop hits from the mid-‘50s through the early ‘60s.

New releases were easy to find – even the mom-and-pop record store I frequented stocked them, as they were the bread and butter of the music industry – though singles and albums on smaller labels could be hit or miss. The music magazines helped fill the knowledge gap for new releases, of course, as there were far more than made it to the airwaves, and sometimes the old – but, by and large, their focus was on the present and future, not the past.

Which is where record guides proved handy. These days, if the various Facebook groups I belong to are representative of the wider world, many music fans decry reviews and such all-encompassing guides as the Rolling Stone Record Guide – especially when they’re critical of their favorites. But to this kid in the early ‘80s, they were necessary for navigating the canons of established artists and bands – as well as discovering older acts that the established history (aka rock radio) had bypassed.

In 1979 or ’80, I bought the red version of the Rolling Stone Record Guide; in 1983, I ponied up the cash for the second. They are among the most important books in my life, sharing space with such tomes as Truman Capote’s Other Voices, Other Rooms, John Irving’s Hotel New Hampshire and Jayne Anne Phillips’ Machine Dreams. Sure, sometimes they gave my favorites one- or two-stars (or, in the case of ONJ, none) – but so what? A good or bad review only reflects the writer’s opinion. Period. And, too, it forced me to think through what I liked about the albums and why.

In fact, my main criticism of the tomes isn’t that they sometimes say mean or petty things about a few of my favorite artists, as that’s de rigueur for dorm-room debates (which, in a sense, the two editions represent), but is the same issue I have with much of music criticism (including, at times, my own in this blog). Making great music isn’t akin to making a model airplane – it’s about intangibles that, as often as not, have more to do with the listener(s): Who we are, where we are in our lives, and what’s going on in the wider world. There’s no right or wrong, per se, just right or wrong for us.

Such is the case for this year for me, at any rate. Much new music has passed me by not because of the merits (or demerits) therein, but that – due to the pandemic – my headspace is elsewhere. That said, there have been some new songs and albums that have found their way into heavy rotation within my den…

1) Courtney Marie Andrews – “If I Told.” From every indication, aka the new songs I’ve heard her play in her livestreams, Courtney’s forthcoming album, Old Flowers, is sure to be a five-star affair. Even if it’s not, this song just tugs at the heartstrings.

2) Jess Williamson – “Infinite Scroll.” I just wrote about Williamson’s latest album, Sorceress, yesterday; to my ears, this disco-light number conjures Yvonne Elliman’s “If I Can’t Have You,” but maintains its independence all the same. “Time did unfold like an infinite scroll” – that sums up life when young, if you think about it. It’s just great.

3) Neil Young – “Try.” After 45 years, Neil’s legendary Homegrown album is finally slated for released in June. For those unaware of its history, Neil planned on releasing the album in 1975 only to decide at the last minute to put out Tonight’s the Night instead. Based on this track, it has the markings of an instant classic.

4) Lucy Rose – “Question It All.” Even if my Tyler the Cat wasn’t featured in the video at the 28-second mark, this single from the British singer-songwriter would be getting my attention. As I mentioned in my First Impressions piece on it, it’s essentially a Marie Bracquemond painting set to song.

5) Emma Swift – “I Contain Multitudes.” On Bob Dylan’s 79th birthday (May 24th), Emma announced her next project: a collection of Bob Dylan covers that she’s dubbed Blonde on the Tracks. That she’s including this, one of the bard’s latest releases, is way cool.