Here’s something from my digital attic: A review from the original Old Grey Cat website, circa 1999, that focused on an out-of-print CD few had heard then and even fewer have heard now. A few months prior, I stumbled across it in the same overly bright CD store I mentioned in my take on Juliana Hatfield’s Bed. I likely payed a dollar for it.

One note: My CD went the way as most of our other CDs at the end of 2018, when we sold them prior to our move to North Carolina, but I still have and listen to the MP3s on occasion. Because of that, and the fact that there is no evidence of the CD online, the graphics are remnants of the late ‘90s, when the standard display for computer monitors was 800 x 600 pixels (and many monitors could only display the previous standard, 640 x 480). Which is to say, what looks small now looked normal-sized then.

One other note: I’ve lightly edited the piece. I had a propensity for using expletives in print back then, but – aside from an occasional “damn” or “hell” – find doing so rather gauche now. (Call it a curse of growing older.)

And another note: I discovered an article (written by one John Morgan) about the band in the Sept. 12th, 1997, edition of VMI’s student-run newspaper, The Cadet. I’ve included that after my review, as it fills in several blanks, including the band’s history.

A final note: Four or five years after I uploaded the review to my site, one of the band members emailed me to thank me for it. He had stumbled upon it and was surprised that anyone beyond their circle had heard and liked the album.

That was going to be my title for this review. Why? Bands come. Bands go. It’s the cardinal rule of rock ‘n’ roll: For every group that makes it, tens of thousands fail to get any farther than the garage. And even those that manage to make it to the driveway…there’s no guarantee. They’re just as likely to end up flipping burgers at the local fast-food joint as they are to make money from an independently financed and released CD, if they choose that route. In a very real sense, talent means nothing. How many great bands never get beyond the local dive?

From all accounts, the Whethermen were a happenin’ band in and around William & Mary, that fine institution of higher education in Virginia. Notice that I used the past tense there. They were a happenin’ band. They broke up earlier this summer – I don’t know the specifics, but I’d wager the parting had less to do with music and more to do with graduation.

This CD, then, recorded and released in 1997, serves as a lasting testament to their talents. I know, I know. I can hear it now: Why spotlight a two-year-old CD by an obscure band that’s kaput? I’ve asked myself that time and again since And Let Me Tell You Something… came into my life a few months back. I’d put it on, groove to it and think: Should I write about this? There are so many – too many – CDs that come my way. Why take my time with this? And especially when I look around the site. There are too many sections that I’ve started and stopped, intending to return but…I get pulled away. Distracted.

To the point: And Let Me Tell You Something…ain’t no over-produced hunk of aluminum. It’s alt.country minus the twang, similar in that the music has a pulse. You can feel it thump-thump-thumping as clearly as the heart in your chest.

Consisting of Knox Hubard (vocals, guitars), Jesse Chappell (bass, fretless bass, harmonica, penny whistle) and Dave Murawski (drums, percussion), their sound is relatively straightforward, with the focus where it should be: the songs. They remind me somewhat of Velvet Crush, circa Teenage Symphonies to God. This is a bit more acoustic, though. “Hey You,” the opener, jumps right in: “What she give you for the number? What she give you for the time?” Fact is, it’s a great kickoff to what proves to be an excellent album “Shari,” the disc’s third track, is another memorable tune. “Hold your breath and just reach out your hand/Shari…how’d you get so alone?” It’s a call to a friend, one suspects, but really it doesn’t matter. It’s as much about me as it is you, a personal message expanding to become a metaphor. And, as David Crosby says, metaphors are the driving force behind great songs. Here, the songs blend together – always a good sign – and become inseparable, one leading into the next, linked together by texture but differentiated by themes and tempo. The album is best heard in one sitting, standing, party, etc., with each song building upon the previous. It’s an “album” in the grandest sense of the word. One of the best moments, “Execution,” starts softly, Hubard offering a plaintive vocal. “To crawl away from justice/was to succumb to fate…” The pieces fit together here, a gradual layering effect that adds to the mood the song creates. “You still got a heart,” Hubard pleads and exclaims at once.

It’s a shame that the Whethermen have broken up. That’s about all I can say. God knows where you can find the CD, now. But, if by chance you happen across it – don’t think twice; it’s alright. Plunk down your hard-earned change and enjoy… 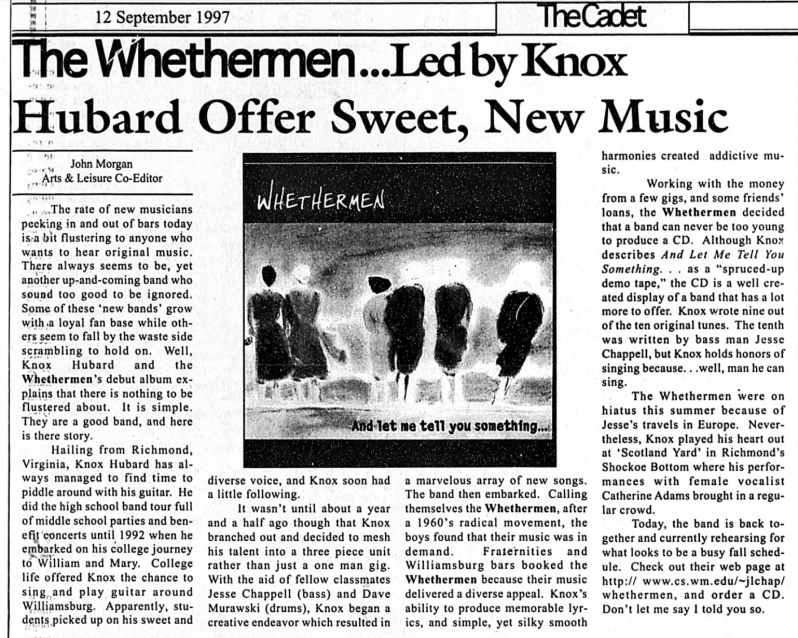