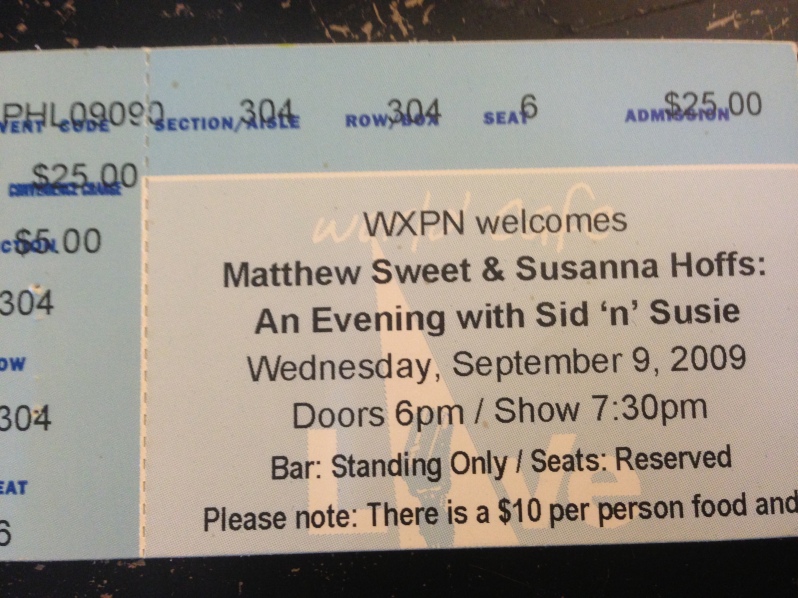 Sid, of course, is Matthew Sweet; and Susie is Susanna Hoffs. They began working together in the 1990s as 2/5s of the band Ming Tea, whose music was featured in the Austin Powers films – no doubt because one of the other members was Austin Powers himself, Michael Myers. The two apparently enjoyed the experience (and each other) so much that they kept on keeping on, eventually releasing the delightful, 1960s-themed Under the Covers, Volume 1 album in 2006 and Volume 2, which mined the music of the 1970s, three years later.

I wrote about both in my review of Volume 3, which navigates the 1980s, a few years back, but the short and sweet of that is this: I loved the first and liked the second. The former was a perfectly cut jewel; the latter was equally polished, yet not without its flaws.

Not flawed enough to stop us from getting tickets to see them in concert, mind you. That said, for whatever reason, we learned of the World Cafe Live show days (weeks?) after it went on sale and wound up stuck in what were, for us, not-so-good seats: at a table a fair distance away from the stage, adjacent to the soundboard.

Susanna, if I remember correctly, had flown into Philly that afternoon, having played with the Bangles the night before in Florida. They hadn’t rehearsed, and for much of the night she referenced lyric sheets – and still messed up the words from time to time, as this video of the night’s second song shows –

But come this night, at the World Cafe Live in Philadelphia, bad seats and no rehearsals didn’t much matter. Matthew was funny; and Susanna was charming. Their love for the music shone like diamonds, and the show was an absolute delight – even with the vocal intrusions of a rather intoxicated gent who kept yelling for Todd Rundgren’s “Hello It’s Me” even after they performed it.

Anyway, as the above clip shows, it was just Sweet, Hoffs and guitarist Paul Chastain (of the power-pop band Velvet Crush) on stage.

Here are some more clips:

And what may have been my favorite moment of the night:

Other highlights included delectable renditions of “You’re So Vain” and “Different Drum.” I remember, though, when the show ended, being a bit bummed that they hadn’t attempted my favorite song from Volume 2, the download-only bonus cover of Blondie’s “Dreaming,” or the drop-dead gorgeous version of the Bee Gees’ “Run to Me” from Volume 1:

In any event, the set list (borrowed from a favorable City Paper review) was thus:

I’ve Seen All Good People/Your Move (Yes); Willin’ (Little Feat); Second Hand News (Fleetwood Mac); You’re So Vain (Carly Simon); (What’s So Funny ‘Bout) Peace Love and Understanding (Elvis Costello); Cinnamon Girl (Neil Young); Different Drum (Stone Poneys); Everybody Knows This Is Nowhere (Neil Young); She May Call You Up (The Left Banke); Hello It’s Me (Todd Rundgren); Couldn’t I Just Tell You (Todd Rundgren); All the Young Dudes (Mott The Hoople); And Your Bird Can Sing (The Beatles); Baby Blue (Badfinger); It’s All Over Now, Baby Blue (Bob Dylan); Maggie May (Rod Stewart); Back of a Car (Big Star); In the Long Run** (The Carrie Nations); To Sir With Love** (Lulu); In Your Room-Manic Monday** (The Bangles); I’ve Been Waiting** (Matthew Sweet)