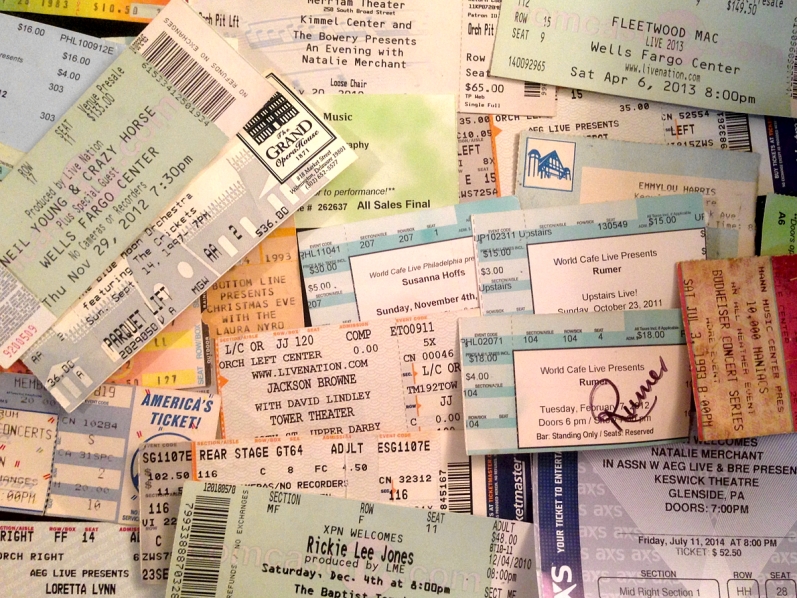 Last night, we saw Garland Jeffreys, Marshall Crenshaw and Jonathan Edwards at the Ardmore Music Hall in Ardmore, Pa. – a club known, years ago, as the 23 East Cabaret.

It was a somewhat odd, though enjoyable, show that found the veteran singer-songwriters sharing the stage in a round-robin format. Garland was Garland – i.e., great. Edwards, whose work I am unfamiliar with, was talkative and funny, and good on the harmonica; the audience enjoyed him. Crenshaw, for his part, was subdued; he never quite connected, perhaps due to playing almost all (relatively) new songs. At evening’s end, and this was the strange part, the three filed off stage – and never returned for the planned encore. Instead, they were waylaid by fervent fans (not us!) seeking to have their photographs taken with them.

Anyway, the night got me to thinking: I never made it to the 23 East Cabaret before it shut down in 1994, but I did make it quite often to its younger (by a year) sibling, the Chestnut Cabaret in West Philly, including its final show, on June 17, 1994. That was Mary Black, the Irish singer.

Now, we’d seen Black in March (maybe April) of 1991 at the TLA – a sold-out show, or close to it. At the time, she was touring in support of her Babes in the Wood album and seemed on the verge of becoming more than just a niche act in the States. On stage, she was poised, confident and, backed by a note-perfect band, spellbinding. The environment helped, too: the TLA had movie theater-styled seats in those days, so it was comfortable. You sat back, relaxed, and let the music wash over you.

The 1994 tour, I suppose, was the next logical step for expanding her base, at least in Philly. The Chestnut Cabaret held about 800 folks – more, actually, given that some shows found people packed in like sardines. And Black seemed to be on a roll: she contributed to the well-received Woman’s Heart compilation in 1992, singing on the title cut with Eleanor McEvoy –

– and singing a song on her own, too. She released the solid Holy Ground album in 1993 – not quite on a par with Babes, but it commanded its share of airplay on WXPN, Philly’s adult alternative radio station.

This 1994 show had the makings of another magical night, in other words.

But on the drive into the city to meet Diane and friends for dinner on a warmer-than-normal mid-June afternoon, I heard something remarkable on the radio: an arrest warrant had been issued for O.J. Simpson in connection with the murders of Nicole Brown Simpson and Ronald Goldman; and Simpson was nowhere to be found.

Anyway, after dinner, we arrived at the venue to find its air-conditioning turned off – and on a day when it hit 89 degrees, that wasn’t a good sign. The second bad sign: the turn-out was sparse. The TLA, with its seats, fit maybe 400 folks, and half that showed up this night. In fact, thinking back, it was likely closer to 150 people milling around. Maybe it was the heat, lack of advertising or just the neighborhood. (West Philly, back then, was bum-ridden, and said bums often extorted concert-goers, insisting on a nominal sum in exchange for “watching” one’s car.)

The third, and fatal, bad sign: the silent TVs near the bar were tuned to CNN, which was all-O.J. As the night wore on, many people – including me – drifted from the concert floor to the TVs to check for updates. Thus, my main memory of the night is of standing with a dozen-plus other men watching O.J. Simpson’s white Bronco lead a phalanx of police cars on a low-speed chase down a California highway. Mary Black, in the background, sang one of her new songs – “Lay Down Your Burden,” possibly, though I can’t say for sure.

Oh, and one more memory: I bought, and drank, the venue’s last (over-priced) bottle of Miller Genuine Draft Beer.