Summer 1985: If it seems like a lifetime ago, well, it was. At the time, I was 20 and worked in the Domestics department of a major department store, where I learned to fold towels and sheets, and deal with oft-obnoxious customers in a polite manner. And, after two years of living the commuter-college life at Penn State Ogontz, I was also preparing to head out to the mothership, State College, for my final two years of school.

Those are my first thoughts, at any rate, when looking at the cover of this specific issue, August 1985, of Record, the Rolling Stone music-only offshoot. Another: Record had shed its newsprint origins and gone glossy, a move that wouldn’t help it from being discontinued within a year. Also, by this point in its brief existence, it had fallen behind the times despite always being distributed a month ahead of the cover date. This issue’s main features, for instance, focused on Robert Plant, Tom Petty and Joan Armatrading, all acts who dated to the previous decade (and, in Plant’s case, the decade before that); and portable cassette players, which would soon give way to portable CD players.

Newer artists were provided much less space. But even an anachronism has its merits, and that comes with today’s Top 5, which is drawn from its pages. Why? It’s the first issue I grabbed when I snaked a hand into the box that holds my old copies.

Another thought: the 1980s weren’t as awful a decade, musically speaking, as is commonly assumed by folks who either didn’t live through them or, conversely, were too old to enjoy them. There were many good sounds to be heard; the difficulty came in discovering them. Rock radio, at least in the Philly area, had retreated into the tried-and-true; it was rare that actual new acts received airplay. Well, that’s not quite accurate – new acts were played, but only those that mimicked the old. It was one of the reasons why, for all their faults, MTV and VH1 were important – they played new artists who mined new sounds.

1) Rosanne Cash – “I Don’t Know Why You Don’t Want Me.” A full-page ad in a magazine primarily geared to a rock audience says much about Rosanne Cash’s Rhythm & Romance, which was released in May 1985. The set apparently upset the country establishment due to the straight-up rock held in some of its grooves – that’s what this recent Rolling Stone article says, at least. And there was plenty of ’80s-styled rock: “Hold On,” “Halfway House” and “Pink Bedroom,” for instance. There was also some adult-contemporary gauze strewn throughout, such as on this track. I remember seeing the video for it on VH1 and thinking Rosanne looked cool. Sexy. And I loved the song, which has a bit of a Carly Simon vibe. I bought the LP not long thereafter, and have been a fan ever since. 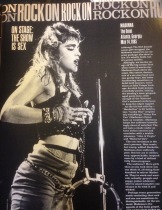 2) Madonna – “Into the Groove.” Believe it or not, there was a time when Madonna wasn’t an icon. By the summer of ’85, she’d accrued a legion of fans thanks to the previous year’s Like a Virgin album and its singles, starred in a talked-about music video (“Material Girl”) and Desperately Seeking Susan, and weathered a sex scandal of a sort (salacious photos from her past were published in Playboy and Penthouse). Many a pop star has started as strong, of course, only to fade away; so regardless of what one thinks of her, the fact that she stuck around says something about her (or, maybe, us). This issue reviews her May 1985 concert in Atlanta: “Perhaps every generation needs reminding that rock and sex are sometimes indistinguishable. At the moment, Madonna’s the apostle of the body gospel, and, as her show makes apparent, it’s hard to recall a more fetching zealot.” Sounds a tad over-the-top to me. In any event, “Into the Groove” was the top-selling 12-inch single this month; and, like much of her music from the ’80s, is fetching and fun.

3) Tom Petty & the Heartbreakers – “Don’t Come Around Here No More.” The ill-fated Southern Accents, initially meant to be a concept album, wasn’t a great album – but it was better than Petty’s previous effort, the generic AOR clunker Long After Dark. This specific song was an MTV mainstay in ’85 due to its Alice in Wonderland theme.

4) The Long Ryders – “I Had a Dream.” For anyone unfamiliar with the Ryders, well, shame on you. They basically laid down the blueprint of the alt.country/Americana movement a decade before it became popular. This particular song, which MTV added that summer into its rotation, comes from Native Sons, their album from 1984 that featured a cover that paid homage to the Buffalo Springfield’s never-released Stampede LP.  (Not that I knew that at the time.) Why MTV added the song, given that it wasn’t new, mystifies me; perhaps the Ryders were finally afforded a budget for a video, who knows? It’s a great song, though – one of their best. The video, on the other hand…. it’s very much of its time.

5) Lone Justice – “Sweet Sweet Baby (I’m Feeling).”  Whenever I listen to anything that features the mercurial Maria McKee, I can’t help it: I fall for her voice with the same ferocity as I first did in April 1985, when I picked up the debut Lone Justice album on cassette based on a Rolling Stone review. It’s one of the greatest debuts of all time, to my ears. (Like the Long Ryders, the group hit the stage a generation too soon – a decade later and they’d have been at the forefront of the nascent alt.country/Americana movement.) As the reviewer, one James Hunter, notes, “With the commitment of her approach—the aim and attitude of Chrissie Hynde executed with the abandon and once-and-past angst of Dolly Parton—McKee’s something to hear.” This song, which was written by Maria, Little Steven and Benmont Tench of the Heartbreakers, is a delicious stew of country, rock, R&B and gospel. But the review also points out the anachronism the magazine had become: The album was released in April, but not reviewed until August.