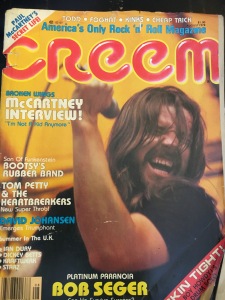 August 1978 wasn’t as hot as some months in the Delaware Valley. As this Weather Underground summary shows, the average temperature was 79 degrees, Fahrenheit. It eked into the 90s on nine occasions, topping out at 91, and plummeted into the 60s during seven overnights. It also rained on 14 days, though only two were true soakers – the first brought 1.16 inches and the second brought 2.34 inches.

For me, a newly minted teenager (I turned 13 the previous month), that likely meant I spent more days inside than out. In addition to being obsessed about music, I was obsessed with TV – so I survived. I also read a fair bit in those days, so I’m sure I spent a fair chunk of time in my room, stereo on and Stephen King novel in my hand.

Hot movies that summer included Grease, Jaws 2, Heaven Can Wait, The Cheap Detective, Hooper and Animal House; I wouldn’t see Animal House for a few years, and have yet to see Jaws 2, but otherwise I saw ‘em all in the theaters. My hometown of Hatboro, Pa., in those days, had its own single-screen movie theater; and the Village Mall in Horsham, which was something of a home away from home, housed a theater with two screens.

In the wider world: The U.S. unemployment rate, as it did for most of the year, hovered around 6 percent, but the wage- and allowance-killer that is inflation continued to threaten the average consumer’s purchasing power. From August to September of that year, inflation was gauged at .76 percent. That may sound like chump change, and in the abstract it is, but the reality is different. The inflation rate for 1978 as a whole clocked in at 7.62 percent, which meant that even with a typical 3-5 percent pay raise, folks ended the year with less spending money in their wallets. 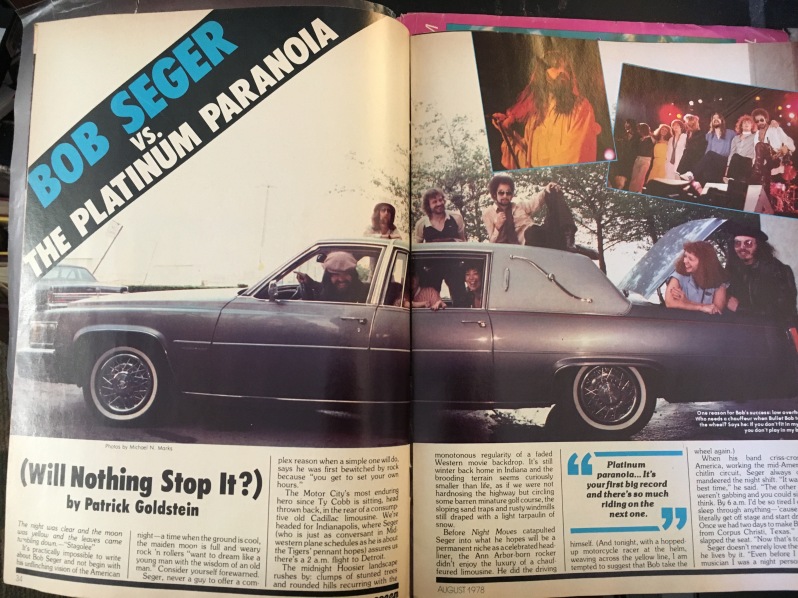 1) Bob Seger & the Silver Bullet Band – “Hollywood Nights.” Bob Seger graces the cover of this issue of Creem. There’s an excellent, in-depth article written by one Patrick Goldstein about him, his entry into the big time with Night Moves, and his new album, Stranger in Town. “[It] was actually finished last November, but then, at the last minute, we scrapped it ‘cause it just didn’t feel right,” Seger explains.

An excerpt: “If there was ever a decade custom-made for the survival of the fittest, it is the ‘70s. It’s not a time for heroes, but for mood jewelry and digital watches. The most inspiring rock albums of the decade, Seger’s Night Moves, Springsteen’s Born to Run and Graham Parker’s Howlin’ Wind, sensing this bleak state of affairs, have turned their back on the present, preferring to explore remembrances of things past.

“This has has always been the most satisfying rock dream, to glorify the passions and pitfalls of adolescence, be it Parker’s yearning to go back to schooldays, Springsteen’s boys on the backstreets who ‘try to look so hard’ or Seger’s bittersweet tributes to ‘the memories that made me a wealthy soul.’

“This isn’t cheap nostalgia. It’s a way of facing up to all our missed opportunities and unfulfilled fantasies. Night Moves is a loving evocation of the wild and furious innocence of youth, jammed like a rush-hour freeway with proud, haunting reminiscences of ‘awkward teenage blues.’ Obviously, this stark and sentimental imagery hit a raw nerve. Night Moves quickly slipped into the pop lexicon, lending its name to a New York City sex club as well as at least one newspaper rock column (and Springsteen fanatics might re-examine the lyrics to ‘Jungleland’ for the Boss’s own melodramatic turn of the phrase).”

In the review section, there’s a write-up of Stranger in Town by one “Robot A. Hull” that recognizes it’s not as good an outing as Night Moves yet is still damn good. “Critically, this LP may cause nary a ripple, but no one can argue that Seger has become lazy and weighted down by platinum, for his approach is still dead ahead w/lotsa elbow grease.”

“Hollywood Nights,” the song I’ve chosen to feature here, is one of my favorite Seger numbers – written, the article informs us, while he was in L.A. mixing Stranger in Town and hanging out with longtime friend (and onetime backup singer) Glenn Frey. It’s a great song for driving.

2) Paul McCartney & Wings – “London Town.” There’s a good interview with Paul by Roy Carr. Among the subjects discussed: his enjoyment of some New Wave artists. Says Paul: “I quite like Elvis Costello. I like Nick Lowe because I’ve known him for a very long time. I really do like what they’re doing…being a bit more adventurous.”

A quote about his old band: “To me, the Beatles are just old newspaper clippings. The fact that people still live it out is just a compliment to me.”

And this exchange about that year’s Wings album, London Town:

CREEM: If anything, there’s a subtle psychedelic undercurrent on many cuts. Some of the arrangements can be traced back to Sgt. Pepper and the White Album.

McCARTNEY: I suppose we were going for that kind of feel by doing more complex arrangements but I’m not about to analyze it. Next time around we’ll go for a bit more sweat. Really, it’s down to writing sweaty numbers and, believe me, they’re the hardest of the lot to write.

The whimsical title track is one of the songs with the “subtle psychedelic undercurrent” that Roy Carr refers to, I think.

3) Patti Smith – “Because the Night.” There aren’t many female artists mentioned in this issue, which isn’t much of a surprise. Women were often given short shrift in the pages of music magazines – not just because of the editorial slants, but because most women were shepherded into the realm of pop or the singer-songwriter genre, which didn’t (always) get as much coverage in rock-oriented periodicals. Rock ’n’ roll itself was primarily seen (and heard) as the domain of men, which explains why a wealth of generic rock bands – Starz, Status Quo, Foghat and that ilk – were afforded plenty of ink. Oh, sure, there were exceptions to that rule – there always are – but it would take another generation or two before women rockers really got their due. That said, there is this full-page ad for Patti Smith’s classic Easter LP: “It’s the album rock & roll has been waiting for. Featuring the hit single ‘Because the Night.’ Written by Patti Smith and Bruce Springsteen.”

4) Carly Simon – “You Belong to Me.” Speaking of female singer-songwriters, here’s one of my favorites, though she’s not mentioned in a positive light. Robert Christgau has a fairly snide take on Boys in the Tree, Carly’s seventh studio album: “Carly generally makes a marriage seem more boring and more nasty than I’ve found it to be, but not on this album, where matrimony is abandoned for more adolescent subjects, Even the two please-don’t-cheat-oh-hubby songs – the better (and nastier) of them written by Carly’s hubby – can be interpreted by her younger fans as please-don’t-cheat-oh-boyfriend. In a way, this is too bad – if Carly were to come up with an interesting song about marriage, someone less conventional musically than Carly & Arif might cover it and give Carole and me something new to sing along to. John and Yoko, where are you now that we need you?”

His opinion notwithstanding, “You Belong to Me” is a good-great song. Written by Carly and Michael McDonald, it was first recorded by the Doobie Brothers on their 1977 Livin’ on a Fault Line album, released as a single and stalled out on the charts at No. 79. A year later, Carly released her own rendition, which hit No. 6. 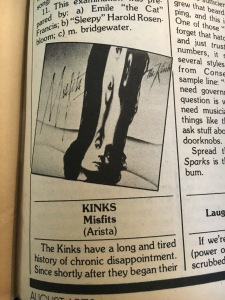 5) The Kinks – “Misfits.” Reviewer Rick Johnson dislikes the Kinks’ 17th studio album. “The Kinks have a long and tired history of chronic disappointment,” he writes. “Since shortly after they began their temporary stay with RCA Snail, they’ve been putting out one come-as-you-are album after another, each one watery enough to float on styrofoam.”

Of the album itself, he opines that “Ray Davies did write a great melody here – the title cut – but the rest of these tunes are plain clothes at best. You get little hints of his stabbed-sweetly melodic turns here and there (‘Perm Waves,’ ‘R&R Fantasy’) but that’s all. A lick and a promise ain’t what I call a great songwriter. As for Davies’ voice, it’s still functioning, but except for some tiny flicks of defiance in ‘Get Up,’ well, let’s just say that George and Roger are probably fluffing up his pillow at the Old Voices Home right now.”

Granted, Misfits is far from a five-star album, but – to my ears, at any rate – the title cut and “Rock & Roll Fantasy” are great songs.