I visited the Archive Books and Paper in Montgomeryville, Pa., a few weeks back. It’s a giant warehouse overflowing with old books, magazines, maps, LPs and…I’d say “junk,” and I guess I just did, but it houses something of interest to almost everyone. It certainly does for me, at any rate. Years ago, prior to our old apartment becoming stuffed from our packrat ways, I would have walked out with dozens upon dozens of magazines and books. This day, however, though we’re now in a house with much more room, I left with just two magazines: Circus, dated January 31st, 1977, which I used for the last Top 5, and this Creem, which is dated February 1977.

Circus, of course, billed itself as “the leading rock & roll biweekly.” Cream obviously disagreed with that claim, though, as it calls itself “America’s only rock ’n’ roll magazine.” 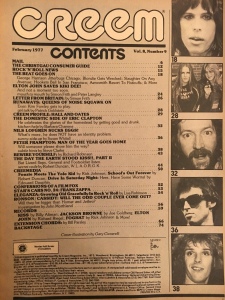 Anyway, I didn’t realize the closeness in dates between the two issues until after I arrived home. I found them buried beneath an assortment of teen-oriented magazines in the music section, and purchased them because they’re from the ‘70s. Even if I had noticed, though, I would’ve bought them. It’s interesting to see the overlap (and lack thereof) between the two, which likely would’ve shared newsstand space for a few weeks given that magazines are generally dated ahead. As a result, today’s Top 5 will feature a few of the same artists (though not the same songs).

In the history books, this month is memorable for a few reasons: Radio Shack committed to production of the TRS-80 computer on the 2nd (it would hit the stores in August); Fleetwood Mac released Rumours on the 4th; and President Jimmy Carter announced on the 24th that the U.S. would begin taking human rights into consideration when doling out foreign aid. Oh, and at a mere 11 years and seven months, I received my detective badge (from the Johnson Smith catalog) at month’s start. But unlike the Hardy Boys or Nancy Drew, who were new to Sunday nights, I never stumbled onto any mysteries. That was, suffice it to say, a disappointment.

Weather-wise, the cold from the previous months let up and, by month’s end, the Philadelphia region experienced a string of days in the 50s and 60s. In sports, the Philadelphia Flyers were on a roll: 9-3 for the month. I’d yet to take much of an interest in them, however.

The first thing that grabbed my eye in this Creem: a letter in the Mail section from one Pete Townshend of Twickenham, England, who’s fed up with Creem readers haranguing him about when the Who’s 10-LP set based on the Bible will be released. (A previous issue had included a parody of Pete’s penchant for rock operas.) It’s an echo of the mythical Masked Marauders, of course, and goes to show that, no matter the era, some folks want to be fooled.

This issue’s cover story, as seen above, is on journeyman Peter Frampton, whose domination of the record charts in 1976 (and transformation from rocker into a teen idol) would be equaled within a few years by his descent into near-anonymity. There are also articles, as the Contents page shows, on Eric Clapton, Nils Lofgren, Kiki Dee, Lou Reed and the Runaways, among others.

1) Linda Ronstadt – “Lose Again.” Robert Christgau tackles Linda’s seventh solo album, Hasten Down the Wind, which was released in August of the preceding year: “Linda’s always wanted to be a Real Country Singer, but RCS put out two or three LPs like this every year. You know—find some good tunes, round up the gang, and apply formula. Like the great RCS she can be, she comes up with some inspired interpretations; the flair of ‘That’ll Be the Day’ and ‘Crazy’ do justice to the originals, and her version of the title song al 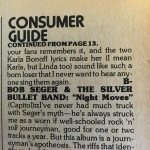 most makes you forget its unfortunate title. But you cover Tracy Nelson’s ‘Down So Low’ at your own peril even if you believe not one in 10 of your fans remembers it, and the two Karla Bonoff lyrics make her (I mean Karla, but Linda too) sound like such a born loser that I never want to hear anyone sing them again.” He graded it a B-.

That’s a rather mean-spirited take on Karla’s contributions (of which there are three, not two). We saw her in concert a few years back and she was beyond good – a magical set. She talked about the first time she heard Linda cover one of her songs, “Lose Again” (which opens Hasten), at a 1976 concert in L.A. and knowing her life had just changed.

2) The Runaways – “Born to Be Bad.” Patrick Goldstein provides a warts-and-all slant on the Runaways, detailing a bit of dissension within the ranks due to sleaze-ball manager Kim Fowley: “How’s the record going? Terrible, [Joan Jett] mutters. Apparently, the Runaways’ marriage with Fowley has followed the contours of the archetypical Liz and Dick affair. Young Mr. F may have discovered the girls (in a Denny’s parking lot or at Rodney Bingenheimer’s or a Ronald Reagan fundraiser—I hear a different story every time I ask, so I don’t vouch for their veracity) but their fondness for the mad studio scientist varies at every mood.” And no wonder. “What AM radio wants is garbage,” Fowley says, “and the Runaways are gonna give them garbage. They heard the applause and got the encores and thought they didn’t need em anymore. Now that it’s time for a make or break record, they’re back in my arms again. The girls know what’s good for them. They sold 70,000 records this time around. If Queens of Noise doesn’t double that figure, Mercury will drop them like that! I wonder how they’ll like working as waitresses on the Strip.”

Later, Goldstein goes deep into Fowley’s effort to cast the band as rock ’n’ roll Lolitas, and quotes Cherie Curie as saying, ’This isn’t a tits-and-ass show. When you’re 16, you can’t stand up there and be a sex object. It’s just not part of being 16. I’m not old enough to play Brigitte Bardot or Raquel Welch. Hell, I’m 16.”

That said, they also have some issues with…Patti Smith, whom they met but didn’t like. “She’s such a snob,” says Curie. And Joan Jett observes that, “I was wearing a leather jacket and she still didn’t talk to me.”

“Born to Be Bad” hails from Queens of Noise. It’s atmospheric, melodramatic and a tad (okay, a lot) silly… and, yet, I love it.

3) Nils Logfren – “Happy.” The Runaways aren’t the only ones who had issues with Patti. Nils Lofgren, in a piece promoting his new LP, I Came to Dance, says: “Patti Smith? I thought she was a great entertainer. But when I played with her, her sound people totally screwed me around. Their sound man went out and got drunk and came back before my set and fucked up everything. My monitors were fucked all night. Then she took a sound check and took so long to get it together with her sound people that I didn’t get a sound check at all. I didn’t care—we went out and played fine and the kids really got off, but she’s totally unprofessional—she’s professional as an entertainer, but on a strictly musician level, she’s unprofessional. It’s partly the people around her, but you have to be responsible for that.”

4) Jackson Browne – “Daddy’s Tune.” Joe Goldberg reviews The Pretender and, like Kit Rachlis in Circus, likes it: “Most of the songs sound like each other, and like songs on Browne’s previous three albums. Somehow, that doesn’t bother me. A lot of very serious people only have one song to sing, one thing to say. Most of us don’t even have that, which is why we depend on Jackson Browne to do it for us. Jackson Browne’s song is mystical and apocalyptic, about the deluge, lost love, changing personalities, friends becoming strangers, the self becomes a stranger, and the healing powers of Mother Water. He has next to nothing to do with Good Time California; he has everything to do with the rootless terror and hopes of redemption that the endless summer sun shines down on. A hundred years ago, he would have made a fine hellfire-and-damnation preacher.”

Of this song, Goldberg writes: “There are any number of memorable lines. I especially like one in ‘Daddy’s Tune,’ about the singer’s attempt to reconcile his difference with his father: ‘Make room for my forty-fives/Along beside your seventy-eights.’ Several places in the record, Browne has the happy facility of being completely specific and totally universal at the same time.”

5) Elton John – “Sorry Seems to Be the Hardest Word.” Richard Riegel reviews Elton John’s Blue Moves, a double-LP set released in October 1976, calling it Elton’s “White Album, similarly color-coded and four-sided, not to mention just as anticlimactic.” He points out that there’s filler, including “Cage the Songbird” and “One Horse Town,” and offers up this snarky observation: “[T]hat atmospheric instrumental, ‘Out of the Blue,’ is not jazz, but it’s not bad, as Mr. Haggard once almost said. This song just may exemplify the ‘blue moves’ of the title, and if Elton continues this trend, soon he can take the late Vince Guaraldi’s place as the chief scorer of those Peanuts TV specials. (Bernie’s already completed a thorough self-analysis through his rigorous study of the complete works of Charles M. Schulz, so he’s all set.)”

6) Bob Seger & the Silver Bullet Band – “Night Moves.” Robert Christgau grades Night Moves an A- in his roundup, calling it a “journeyman’s apotheosis. The riffs that identify each of these nine songs comprises a working lexicon of the Berry-Stones tradition, and you’ve heard them many times before; in fact, that may be the point, because Seger and his musicians reanimate every one by their persistence and conviction. Both virtues also come across in lyrics as hard-hitting as the melodies, every one of which asserts the continuing functionality of rock ‘n’ roll for ‘sweet sixteens turned thirty-one.”