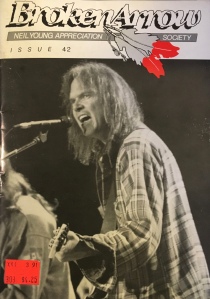 When I look back, the pre-Internet life seems quaint – almost like a black & white movie.

For decades, the morning routine was basically the same regardless of one’s household: we rose, brewed and drank coffee, ate breakfast and consumed the first news of the day from a newspaper delivered to our doorstep; the radio, with said news often being little more than the weather, sports and traffic interspersed amongst the music from our preferred radio stations; or the TV, where the day’s first headlines were relayed on the morning shows, which – as today – were as much entertainment/lifestyle-focused as news-oriented.

And when we split for work, we either tuned in a favorite terrestrial station or plugged in an 8-track tape, cassette or CD.

Life unfurled at a slower pace; and we didn’t expect fast results. For music fans, that meant artists zoomed through the atmosphere like comets, burning bright for weeks or months at a time before leaving orbit. New releases brought with them publicity, reviews and sometimes tours, but what they performed in the cities before or after yours was a thing of mystery. Even in the age of MTV and USA’s Night Flight, they rarely appeared on TV for anything more than a performance; and interactions with fans were generally at the stage doors or hotel lobbies.

Then as now, however, fans always wanted more – and, thus, sprung the fanzine. By the late 1980s, I read a bunch of them devoted to specific genres, artists and bootlegs – Beatles’ bootlegs, to be specific. They weren’t available in normal music stores, not even the new-fangled CD store I worked at, but they could be had in indie shops and Tower Records. Backstreets, Beatlefan, The 910, and dozens of others (whose titles I can’t, at the moment, remember) all passed through my hands at one point or another.

Another favorite: Broken Arrow, a ‘zine focused on all things Neil Young. I first encountered it in the mid ‘80s at City Lights Records in State College, but it wasn’t until the early ‘90s – and our regular excursions to Tower Records – that I began reading it with any regularity. This issue, which I actually bought in March (as evidenced by the price tag), is a good example of why: 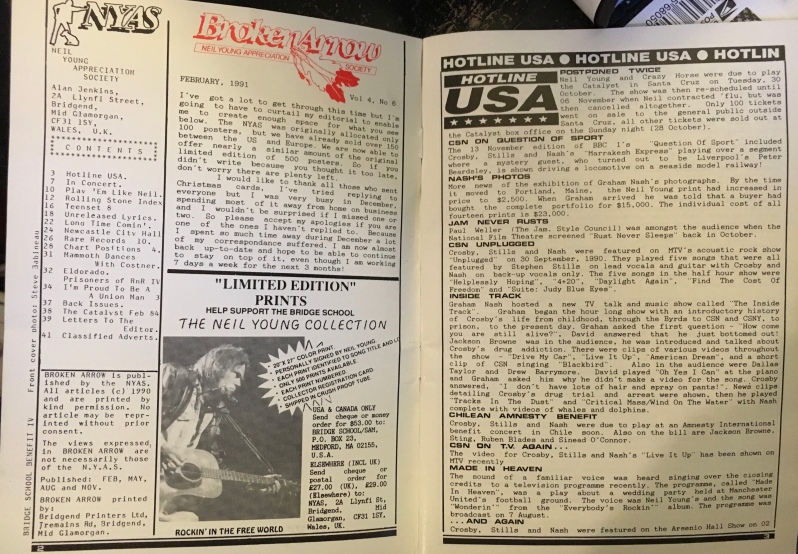 Anyway, given that a recent Top 5 covered January of this year, I won’t go into a summary of my life. It was more of the same. I had a job I enjoyed, a wife I loved and a life that was more fun than not. 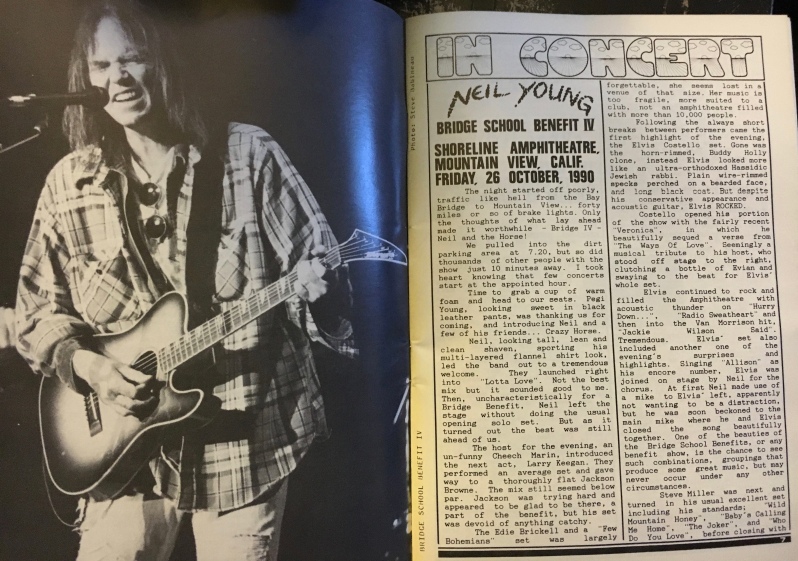 1) “Days That Used to Be.” Dave Sigler reviews the 1990 Bridge School benefit, which featured Elvis Costello, Steve Miller and, of course, Neil with Crazy Horse: “Neil donned a black, amplified acoustic and led the Horse into a stunning version of ‘Love and Only Love,’ complete with extended jams. ‘Everybody Knows This Is Nowhere’ followed and was done well. The band then did ‘Days That Used to Be’ and it was kind of halfway between the treatment Neil gave the song during the ’88 Bluenotes tour (as well as the ’89 shows with the Restless) and the Ragged Glory version.” (Click on the image to read the whole account.) 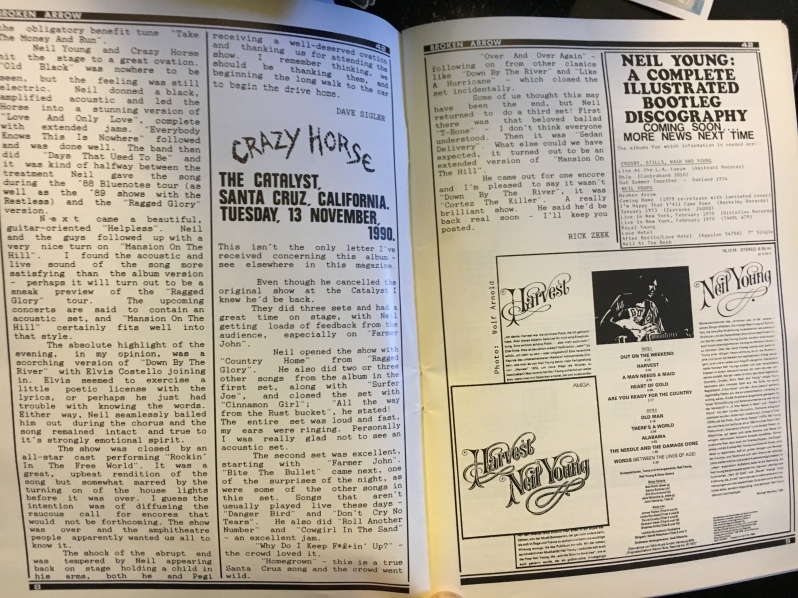 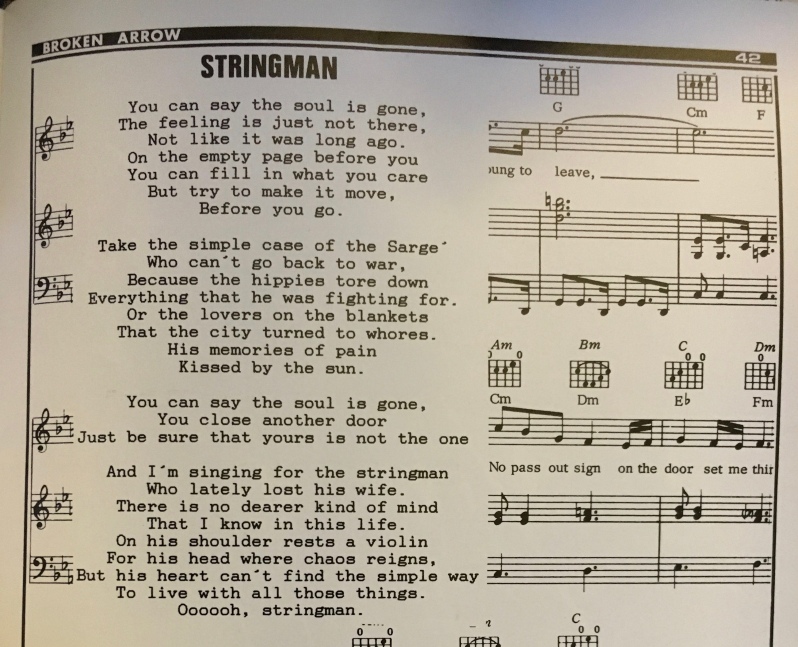 3) “Stringman.” This is an old song of Neil’s, originally slated for the never-released Chrome Dreams in 1977, that eventually saw the light of day in 1993 on Unplugged. Some say he wrote it for old friend Stephen Stills, but who knows? 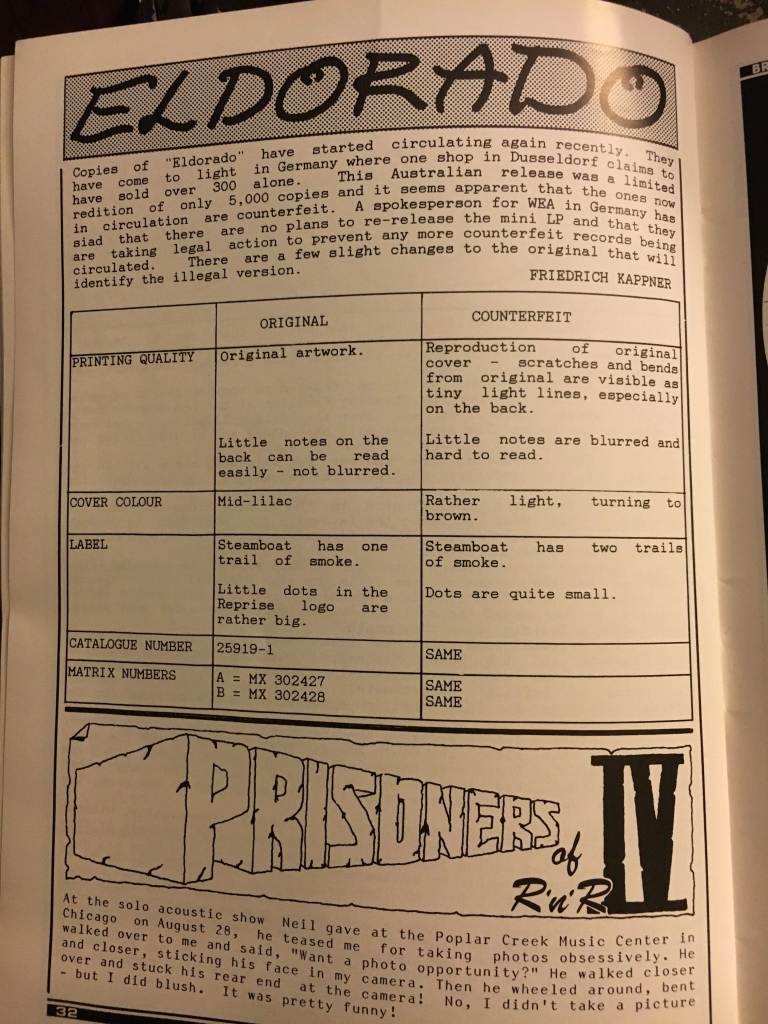 4) “Cocaine Eyes.” In spring of 1989, Neil Young released the El Dorado EP in Australia and Japan with a band he dubbed the Restless (Chad Cromwell on drums and Rick Rosas on bass). The songs were drawn from the unreleased Times Square album he recorded in December 1988 and a few of them would resurface, again, in different mixes on Freedom that fall. This fierce song, also allegedly written about Stills, ranks with his best. 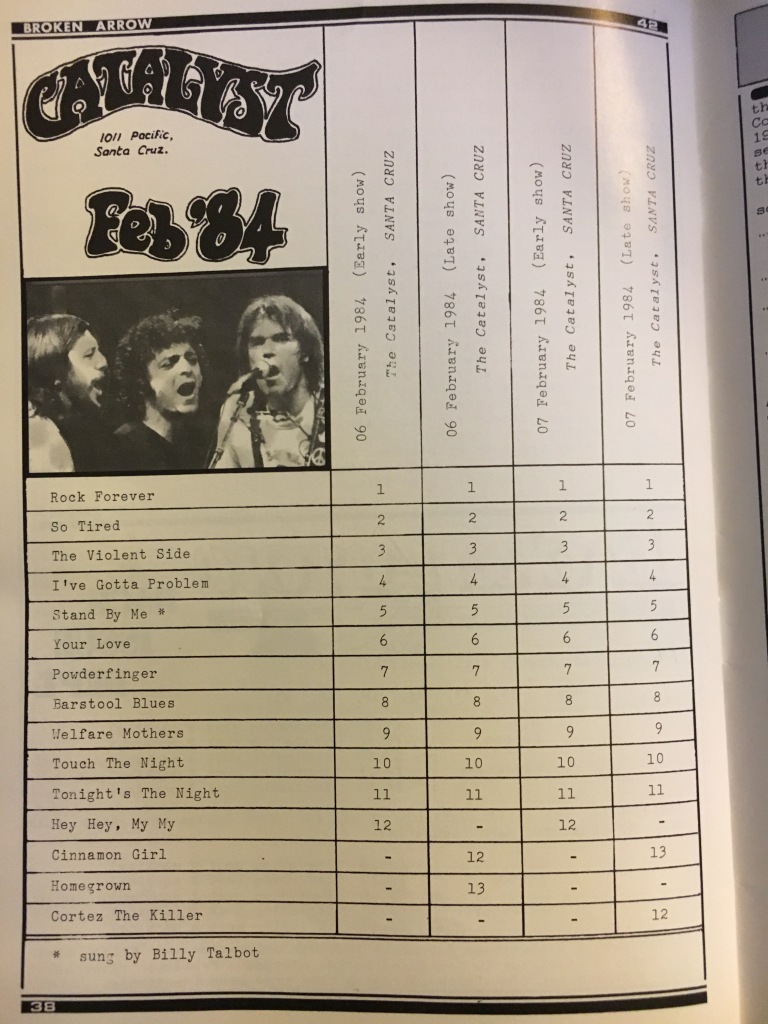 5) “Rock Forever.” A different year, a different Catalyst show. And a song – often bootlegged as “Rock, Rock, Rock” – that works better in theory than practice, but is fun nonetheless.