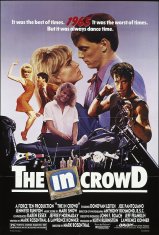 Yesterday morning, the MGM channel aired – and I DVRed – a true lost treasure, which we watched last night: The In Crowd (1988).

Set in 1965, the movie tells the story of a (fictional) fast-talking Philadelphia disc jockey named Perry Parker (Joe Pantoliano), whose daily TV dance show is on its last legs due to the changing times, and two of his star dancers: suburban boy Del (Donovan Leitch) and city girl Vicky (Jennifer Runyon). At the start, Del is dancing alone in his living room, not on TV; he dreams of not just dancing with Vicky on the show, but wooing her away from her hunky beau and dance partner Dugan (Scott Plank). Del’s also well-educated and, if his neighbor Gail (Wendy Gazelle) has her way, destined to attend medical school. Vicky, meanwhile, doesn’t know the difference between fiction and friction.

The film’s director, Philly native Mark Rosenthal, described it as “a tale of two cities, the affluent suburbs and the hard-edged inner city,” to the Allentown Morning Call just prior to the film’s release in February 1988. (Rosenthal also co-wrote the screenplay with Lawrence Konner, with whom he’s co-written a ton of stuff.)

It’s that, true, but it’s also a love letter to a specific time and place. Del hails from Cheltenham, which is literally just across the street from North Philadelphia; Vicky lives in a Philly row home and hangs out at the Germantown train station with her friends; and the TV studio where the dance show is shot is the Tower Theater in Upper Darby. Other welcome local touches: Perry, Del and Vicky make a publicity appearance in Wildwood, N.J. (a popular beach town); Vicky’s dad, a cop, drives a red police car (a staple of Philadelphia at the time); and Del’s initial, un-chaperoned backstage tour of the TV studio takes him past Sally Starr and Uncle Pete, two local kiddie-show hosts. (Starr appears as herself while Uncle Pete, though only on-screen for a few moments, is played by his real-life son, Peter Boyle.)

And when he volunteers to dance with his dream girl after Dugan’s been banned from the show? Sparks fly.

It’s not a perfect film (far from it), but it’s eminently watchable – it touches the heart each time out. Leitch, the son of singer-songwriter Donovan, turns in a terrific performance as the suburban kid – at once arrogant, naive and kind; and Runyon perfectly captures the sweet innocence and ignorance of Vicky, who knows that she’s nowhere near as smart as Del or Gail.

Joey Pants is also terrific as Perry Parker, who was modeled after Jerry Blavat, Hy Lit and other legendary Philadelphia radio-TV personalities. In this scene, he’s just learned that his show has been cancelled, with a live feed of the San Francisco-based “Psychedelic Shack” destined to take over his time slot.

The In Crowd bombed at the box office, unfortunately. Far worse films have done well, so I doubt the fault lies with it but, instead, Orion Pictures, which failed to properly support it, or its mid-February release date. It would have done very well in early or late summer, I think. Its post-theatrical life has been likewise awful; it was released on VHS in 1990, but – likely due to music-licensing issues – never on DVD or blu-ray. It also rarely pops up on free or premium TV. In fact, we had it saved on our old DVR, so we could (and did) watch it at will every few months until our 2014 move, which necessitated trading in our old cable box for a new one. Six months back, during one of my routine searches for it, I discovered that It is available to rent via Comcast OnDemand, so we did that – the only time we’ve rented a film that way. Then, last week, I found it was scheduled for the MGM channel…  (Someone – Shout Factory, perhaps – really needs to rescue this treasure.)

Anyway, if you see it: DVR it. Watch it. And watch it again!