Earlier this week, I planned to use this morning to write a grand essay about audience expectations, artistic inclinations and one of my favorite poems by Wallace Stevens, “The Man With the Blue Guitar,” which was partially inspired by Pablo Picasso’s “The Old Guitarist.”

The man bent over his guitar,
A shearsman of sorts. The day was green.

They said, “You have a blue guitar,
You do not play things as they are.”

The man replied, “Things as they are
Are changed upon the blue guitar.”

And they said then, “But play, you must,
A tune beyond us, yet ourselves,

A tune upon the blue guitar
Of things exactly as they are.”

There’s more, of course, and – as with “The Idea of Order at Key West” – much of the poem is referential and deferential to the power and source of poetry (and art as a whole) – it’s a perfect subject for a thought piece, right?

But a funny thing happened between then and this afternoon: 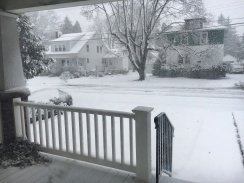 A nor’easter blew through the Philly region (and the Northeastern U.S.) yesterday. Among its other misdeeds: heavy rain, strong winds and blinding snow. It was the first two that caused me to work from home; the snow was something of a surprise, as the last weather map I saw showed my hometown on the borderline between receiving none and two-or-so inches. (And if the latter, said the same report, accumulations would mainly be on the grass.) So imagine my surprise when I opened the front door at 12:30pm and saw what appeared like a white blanket draped across the neighborhood.

Still, that shock aside, it wasn’t much different than all of my workdays: busy, busy, busy. As 5 o’clock neared, I began calculating just how much longer I could vs. should work. Fridays are Fridays, after all, and tired eyes are tired eyes, but deadlines and commitments must be met. Before I could map out my end time, however, the lamp beside the desk flickered – and, just like that, we lost power. “Don’t worry,” I told Diane. “It’ll be back soon.”

But, as the minutes turned into an hour, and that hour into hours, it became obvious that it wasn’t to be soon.

To make a bad thing worse: the storm also killed cell coverage for us. I.e., no Internet. No Facebook. No Twitter. No YouTube, Netflix, Hulu or Amazon Video. No iCloud. Even making a phone call proved problematic: It took two hours before I was able to call our electric company to report the outage and learn what the ETA for power to return was. (The initial estimate: the 4th at 5pm.) The only good: my Morphie battery pack for my iPhone kept it at 100 percent for the next 20 hours; Diane’s iPads were more or less fully charged; and, though her iPhone wasn’t, my MacBook was – and we used that to bring her phone back to life. (Not that she could do anything with it beyond read.)

I have several portable hard drives filled with music, but we wanted to be transported into another world – a good movie or TV show. Without access to the Cloud, or my powered hard drives (where I store things I’ve downloaded through the years, options were severely limited – some episodes of Pretty Little Liars, which Diane never got into, and the pilots for Veronica Mars and Once Upon a Time, which were both free downloads at some point from iTunes. So we watched both on my MacBook while lying beneath a small stack of blankets in bed.

The Veronica Mars pilot remains a thing of genius. It took us away from a chilly, dreary night to sunny Neptune, Cal., where a seemingly hardened teen detective shows herself to be, in reality, a marshmallow. I still miss that series. Once Upon a Time was less genius and more fluff, but fun fluff. (It’s still on the air, actually, though we stopped watching ‘round about Season 4.) 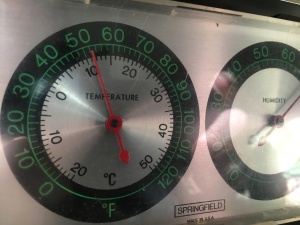 This morning, cell reception was back though the electricity wasn’t – but it wasn’t a super-cold night, so in that sense we were blessed. The downstairs was 52 degrees (Fahrenheit), as the picture shows; it could have been much, much worse.

After a run to Dunkin’ Donuts, where the Girl Scouts-branded Coconut Caramel coffee truly hit the spot, we gathered our various gadgets

and hightailed it to my mother’s to charge everything that needed charging. It was there, round about noon, that we learned from Facebook that our power had likely been restored, as a nearby business was back online. And, sure enough, when we swung home, it was – the upstairs TV was blaring like a banshee.

We headed out to celebrate at our favorite restaurant – only to discover that it was closed due to a power outage of its own. In the immortal word of the eminent philosopher Homer, “D’oh!”

And, with that, here’s today’s Top 5: Of Marshmallows, Music & Nor’easters.

1) Juliana Hatfield – “Physical.” The latest song from Juliana’s forthcoming ONJ tribute is an absolute stunner. In a Stereogum article, she says “Olivia Newton-John’s lusty ‘Physical’ is a groovy, bouncy song, but my take on it is darker, more aggro, because I don’t think of lust as fun or funny; I think it’s dangerous and disruptive and mostly unwelcome. So that is my interpretation of “Physical”: the human condition is a bummer, and desire a frustrating impediment to serenity.”

2) Maryanne Window & Mary Lou Lord – “Long May You Run.” So I just discovered this sweet rendition of the Neil Young classic, which is from early 2014, this past week. Maryanne Window is an Australian musician and producer, and collaborated with Mary Lou on her 2015 Backstreet Angels album (an overlooked treasure). Here, she takes the lead while Mary Lou sings backup.

3) The Staves – “Sadness Don’t Own Me.” I’ve been playing the Pine Hollow EP over and over (and over) on my commutes of late. It’s stress-reduction set to song. And this song… as Diane just said, “It’s just so beautiful.”

4) Lucy Rose – “All That Fear.” Hearing the Staves always leads me to Lucy Rose due to “Floral Dresses.” Earlier this week, she shared the video for this Something’s Changing out-take and said this about it on her Facebook page: “My husband Will and I filmed this on our first night in Australia. I was jet-lagged, unwashed hair and had nothing to hide. I wanted to show a side of me that for so long I wouldn’t have shown anyone and a side of me I’ve grown to love.”

Courtney Marie Andrews – “Kindness of Strangers.” I shared this last week, and the audio before that. It’s another song I can’t get enough of. (Her forthcoming album, May Your Kindness Remain, is going to be grand.)