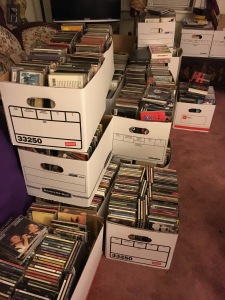 By 2007, our music collection was in disarray. We had three CD towers that each fit 400 discs, a sprawling mass of smaller CD racks behind and beside them, plus stacks and stacks, and stacks, of jewel boxes. They took up the entire front end of our old apartment, plus plenty of space in the “den” (which was basically a cramped walk-in closet), where additional racks and stacks could be found. Oh, and did I mention that each of the towers had snapped at the base? Or that, while certain – usually newer – CDs were within reach, finding specific titles often turned into an hours-long chore? You’d sort through one pile, then another, and then another, and hopefully find what you wanted by day’s end. It was a headache and a half.

That’s why, that January, I invested in an expensive ($199) 500-gig Western Digital external HD, encoded every track as a 256 or 320 kbps MP3 – about 2500 discs at the time – and then boxed everything up. In a sense, I created our own private Spotify. In the years that followed, we continued to purchase and rip CDs, but – like many others – also we began buying downloads via iTunes, Amazon Music, Bandcamp and HDTracks, and then subscribed to Apple Music. When a CD, I rip before listening, as I listen to encoded files via my MacBook, iPhone or Pono Player – either via my THX-branded Logitech computer speakers or my Bluetooth-equipped stereo system.

I also re-ripped many of the same discs, this time as FLAC files, three years back, though they’re housed in a separate library. 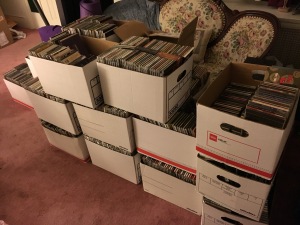 But now that we’re preparing to move – and, at least for a time, downsize to an apartment – the question is: Do we want to ship 20+ boxes of CDs across the country just to put them in storage for the next six or 12 months? Especially since we don’t actually listen to them? And what of our hundreds of LPs, some of which date back decades? Do we get rid of them, too?

No. And yes. Over the past few weeks, we’ve combed through everything, removing must-haves (special editions, autographed CDs, select favorites, and some where one or both of us are thanked in the credits), and stacked the boxes in the living room. We will part with them. Most LPs, though none that I’ve acquired in the last few years, will be sold, too. The only question is how much we’ll make from one of our life’s main pursuits. (I already know the answer: Not much.)

The reason that our CD collection continued, and continues, to grow: We buy new releases from old favorites, of course, but also releases from new and relatively new artists. We’re out of the mainstream in that regard. A recent survey by Deezer shows that most folks experience what’s dubbed as “musical paralysis” by 30 years of age. They stop seeking out new sounds and artists, and instead listen to the same-old, same-old, over and over, and over, again. The demands of life, work and raising kids, and competition from TV and video games, has made the music-discovery process too much of a time-sucking chore.

What’s a chore to one, of course, is pure joy to another. I can’t imagine not digging through the digital bins of Apple Music and YouTube, or flipping through the pages of Mojo and Uncut, in search of something new.

And, with that, here’s today’s Top 5: Our Own Private Spotify (aka New Music, Vol. LXXIII).

1) Paul Weller – “Gravity.” Weller’s recent True Meanings album is one of the year’s best, and in weeks to come – if I can carve out the time – I hope to review it. For now, here’s the video for “Gravity,” which he released this week.

2) American Aquarium – “The World Is on Fire.” Echoes of Bruce Springsteen and Steve Earle can be heard in the North Carolina band’s stellar work.

3) Jill Sobule – “Nostalgia Kills.” The singer-songwriter has released a new album, her first in four years. And, as the title track indicates, it’s a stellar set. (“We have to keep moving or die…”)

4) Stonefield – “In the Eve.” I know next-to-nothing about this Aussie band, which was featured in Paste Music’s “Daytrotter” sessions this week, other than they’re four sisters, they’re a tad retro, and very cool. I look forward to digging into their oeuvre in the weeks ahead.

5) Mary Lou Lord – “Lights Are Changing.” The Massachusetts-based singer-songwriter’s 1998 album Got No Shadows was issued on vinyl for the first time this week, and if we weren’t busy boxing things up I’d have already ordered it. This cover of the Bevis Frond tune is one of many highlights of the album, which features support from such luminaries as Shawn Colvin, Roger McGuinn, the Bevis Frond’s Nick Saloman, and Elliott Smith. McGuinn performs on this song, in fact. (Of note, Mary Lou also covered it on her self-titled 1995 EP. The main difference: Juliana Hatfield sings back-up on that version.)