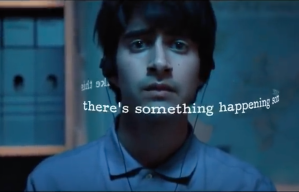 The whys and wherefores of music fandom are such that it’s near impossible to convey them on screen. They’re simultaneously elusive and illusive, mythical Bigfoots found only in the deepest reaches of the synaptic thicket called the brain. A series of interlinked sounds kicks off a chain reaction within our neurotransmitters – that is, physically speaking, what happens. But why one melody, guitar riff and soaring chorus instead of another?

Among music-centric films, it’s rare that a fan is front and center – and rarer still that we see how the fan is born. I Wanna Hold Your Hand, Diner, The In Crowd, High Fidelity and Almost Famous are all good to great films, for example, but only Almost Famous shows what fueled the fandom. And the scene when 11-year-old William Miller flips through the LPs his sister left for him, lights a candle and places the Who’s Tommy on his turntable is wondrous – but then we jump a few years into the future to find William’s fandom in full swing.

“Blinded by the Light” – which the Washington Post posits “may be the feel-good movie of the summer” – fills in the gap. Set in 1987 Luton, England, the movie follows Javed Khan (Viveik Kalra), a British teen of Pakistani descent who dreams of being a writer. But life, he fears, is passing him by due to his overly strict father. At the same time, he deals with the realities of racism and the era’s economic tumult (1987 was the seventh year in a row of 10+% unemployment in the U.K.). His only escape comes from the Walkman hitched to his belt, and the feather-light headphones he slips over his ears whenever he can. At the movie’s start, he listens to such Britpop acts as Madness and Pet Shop Boys, but the music’s a deflection from his life, not a reflection of it. Until, that is, he inserts Bruce Springsteen’s Born in the USA into the Walkman and hears “Dancing in the Dark” for the first time. Roops (Aaron Phagura), a new friend at school, had lent him the cassettes for it and Darkness on the Edge of Town, and the music is a revelation, articulating everything he’s been unable to put into words about his life. As seen in the trailer below, the lyrics swirl around his head…

…and, before you know it, the music and lyrics inspire him for the better.

Directed by Gurinder Chadha, Blinded by the Light was inspired by Sarfraz Manzoor’s memoir Greetings from Bury Park, and written by Manzoor, Chadha, and Chadha’s husband Paul Mayeda Berges. In some respects, it follows the formula laid down by Chadha’s Bend It Like a Beckham, but substitutes Springsteen fandom for soccer. There are several scenes of racism-related ugliness; moments of utter sweetness, such as when Javed serenades a girl he fancies; and moments of pure giddiness, such as when Javed and Roops take control of the school’s music station and blast the Boss for all to hear.

I found it a fun, feel-good film that explains how the best music can and does transcend its origins, and reflects the listener’s reality as much as the artist’s. As I’ve noted before, the mark of much (though not all) great art is that it’s both personal and universal, restrictive yet expansive. That, in the late ‘80s, a British kid of Pakistani descent can fall under the sway of a New Jersey born-and-bred, working-class rock star shouldn’t come as a surprise. Life is life, after all, no matter where one lives or what one’s background is.