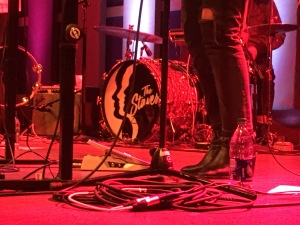 I think that maybe I was dreaming. I smelled cinnamon and spices. I heard music everywhere. All around was a kaleidoscope of color. I stood beside Diane at the edge of the stage in the sold-out downstairs room at the World Cafe Live in West Philadelphia, the two of us somewhat out of place amongst the 20-somethings milling about, awaiting the arrival of the Staves.

For those unfamiliar with sisters Emily, Jessica and Camilla Staverly-Taylor, whose ages range from the early 30s to mid-20s: They hail from Eau Claire, Wis., by way of Watford, Hertfordshire, England, which I gather is a suburban London enclave, and were raised on the hippie songs and harmonies of the Beatles, Simon & Garfunkel and CSNY, among others. In fact, the first song they ever properly worked out harmonies for was “Helplessly Hoping.”

The pre-show music was a blast, and included the Beatles, Waterboys and, as the sisters and drummer Dave Power filed onto the stage, Don Henley’s “The Boys of Summer.” Everyone in the audience sang along to that classic track – a foreshadow of a surreal moment yet to come.

The Staves opened with the mesmerizing “Blood I Bled” from their acclaimed 2015 album If I Was.

The piece d’resistance, at least for me, came midway through the 75-minute set: the wondrous “Make It Holy,” which features a strong CSN vibe.

There was also some diversions: Everyone sang happy birthday to Dave Power – whose martial beats, I gotta say, boomed throughout the night.

And, in the surreal moment I mentioned above, Emily, Jessica and Camilla were joined by many in the audience when, in an off-the-cuff moment, they sang the theme to Fresh Prince of Bel-Air! (A truly scary moment, that.) Here’s a brief clip:

The set also featured their new single, “Tired as Fuck”…

…and, in the last call from lands I’ve never been too, they closed the night with the CSN-flavored “Mexico.”

So, anyway, I thought that maybe I was dreaming. I smelled cinnamon and spice. I heard music everywhere. All around was a kaleidoscope of color. It was a great concert, in other words, akin to walking through a Renaissance Fair on a late-spring day, only better. Much better. All one really need know is this: on the ride home, Diane said “They may have been your artists before, but they’re our artists now!”

About the only complaint that I can come up with: the length of the show. But, in fairness, I’d likely have left thinking the same even if they’d played twice as long. 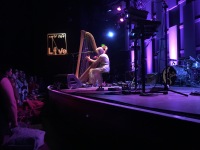 I’d be remiss if I didn’t mention the opening act Mikaela Davis, who’s a harp-playing wonder with a luscious voice. When I first saw the harp on stage, I braced for a set of elevator music. Far from it. She was, in a word, hypnotic. Here she is from last week in Dallas: