Tift Merritt delivered a spellbinding set at the World Cafe Live in Philadelphia on Wednesday that was bookended by two sublime tunes from her wondrous 2017 Stitch of the World album: “Wait for Me” and “Love Soldiers On.”

In between was a torrent of memorable new songs – “Dusty Old Man,” “Heartache Is an Uphill Climb,” “My Boat,” “Stitch of the World,” “Icarus,” “Proclamation Bones,” “Something Came Over Me” and “Eastern Light” – and a sprinkling of past classics, including “Traveling Alone” and “Small Talk Relations” (from her 2012 Traveling Alone album); “Feel of the World” and “All the Reasons We Don’t Have to Fight” (from her 2010 See You on the Moon album); “Good Hearted Man” from her 2004 sophomore set, Tamborine; and the title track to her 2002 debut, Bramble Rose, which she joked would be on her tombstone.

As the above videos demonstrate, she was simply magnetic. Her voice was sure, strong and (as always) sweet despite a slight case of the sniffles. She alternated between acoustic guitar (several, actually) and keyboards except for “Proclamation Bones,” when she chopped chords with an electric axe. Joining her on stage was her beau Eric Heywood, whose credits include Son Volt, the Pretenders, Jayhawks and Ray LaMontagne. He played steel guitar most of the night, but joined her on acoustic for a few mid-set sit-down songs.

During “Icarus,” based on the Greek myth, it occurred to me – and not for the first time – that music artists and their audiences are somewhat akin to the singer and narrator in “The Idea of Order at Key West.” If you’re unfamiliar with the 1934 poem by Wallace Stevens, don’t worry; it just means that you weren’t an English major. I should mention that I’m decades removed from those years, so I’m sure I’m off in my analysis. But, in it, the narrator and a friend observe a woman singing beside the sea at dusk – and from that simple scene comes an insight into the human experience: we instill a semblance of order on a world that is, in fact, beyond our control; and that semblance has a ripple effect on those who surround us.

That’s my short and sloppy take, at any rate. 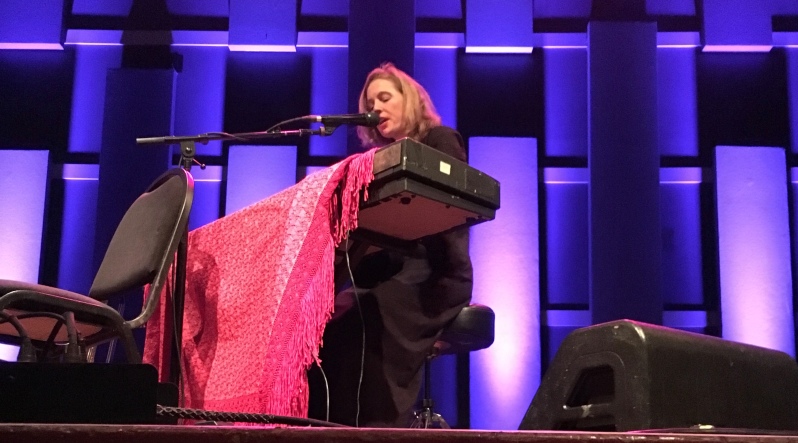 To continue in that vein: the artist is the “single artificer of the world,” creating a reality that is his or hers alone, though others can observe and be profoundly moved by it – which is what occurs to the narrator of the poem, as the sixth stanza indicates. Stevens takes it a step further in the poem’s last lines, however, when he introduces the “blessed rage for order” – the semblance of control that comes from the singer seemingly channeling the sea (when, of course, she could and did not).

This night, in a sense, Tift Merritt was that (far more articulate) singer by the sea, conveying the “ghostlier demarcations” and “keener sounds” that reveal “ourselves” and “our origins.” For a brief time, she infused order and beauty into an unordered and, all too often, ugly world.