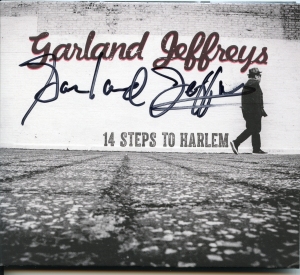 Since the dawn of what I’ve decided to dub the fast-track century, aka the 21st, there have been a few constants in my life. Family? Of course. Feline? Check. Music? Well, duh! I listen as much now as ever – new artists and old favorites forever intermingle on the ever-evolving soundtrack of my life. Some new artists become old favorites in short order. And old favorites, though they may fade to the background for a spell, always resurface.

There’s just not enough time – not for music, and not for life. It “goes away as quick as a wink. Quicker than you think.” Those lines come from “Time Goes Away,” a meditative gem on this, Garland Jeffreys’ latest long-player. It’s a beautiful, plaintive tune buttressed by the addition of Garland’s 20-year-old daughter Savannah, who echoes her father’s simple yet profound words: “Time goes away/Till you don’t have many/Till you don’t have any.” (That young voice deserves an album of her own. Just sayin’.) It’s a topic Diane and I discuss often these days, actually: yesteryear often seems like yesterday to us. And our tomorrows…we both know there’s less of them to come.

As a whole, 14 Steps to Harlem finds Garland looking back, surveying the present and contemplating the future – and doing it all to melodies that linger long after the music has ceased. This morning, for instance, I woke with the title track in my head:

Other highlights include “When You Call My Name”…

His cover of the Velvet Underground’s “Waiting for the Man,” written by his old friend Lou Reed, is great to have on album. (It’s been a concert staple of his for the past good while.)

And “Luna Park Love Theme,” which features Lou’s wife Laurie Anderson on electric violin, is the perfect cap to a great outing.

(Here’s the AP’s review; and an excellent USA Today article on the album.)