An epiphany came to me Wednesday night, right around 6:20pm, while stuck in traffic on the turnpike. By that point in the crawl home, Juliana Hatfield’s rendition of Olivia Newton-John’s “Magic” – which topped the charts in August 1980, not long after I turned 15 – popped from the car’s speakers at near-max volume. When Olivia sings it, she embodies the muse Terpsichore (aka Kira, the character she played in the movie Xanadu). Her vocal is seductive and coy, basically honey marmalade for the soul. When Juliana sings it, however, the alluring enticement turns into an earnest vow. It’s still sweet, but in a different way.

A similar tonal trade occurs on the album’s other 12 tracks, as well as on the two tunes found on a separate 45 (that, hopefully, will be made available to the masses via digital download). Aside from a sped-up “Dancin’ ‘Round and ‘Round,” the arrangements hew close to the originals, though the pop and pop-country overtones are replaced with the punky pop-rock embellishments that have long accented Juliana’s work. Electric guitars are often at the fore – even on the opener, “I Honestly Love You,” which is raw and real. 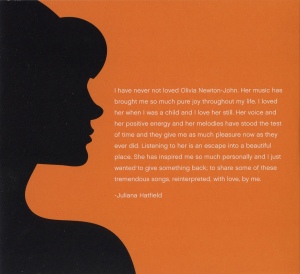 The epiphany: These songs are as much a reflection of Juliana’s soul as her own compositions. It’s “This Lonely Love” brought into the open for all to see and share.

“Suspended in Time,” also from Xanadu, is another highlight. Sonically speaking, it echoes Juliana’s polished in exile deo or How to Walk Away albums, and features equally lush vocals. “Have You Never Been Mellow” is even more evocative on album than it was when Diane and I saw her perform it last October; like the other songs here, it captures the spirit of the original while adding a touch of Juliana’s heart. It’s essentially about slowing down and finding peace from within – an essential message for this, or any, time.

The four Totally Hot covers are great. That was the album, of course, where Liv transitioned to a crunchier pop-rock sound, and scored top 10 hits with “A Little More Love” and “Deeper Than the Night.” A video for the former has been out for some time now…

…and hopefully a video for the latter, which is the A side of the bonus single, is on its way. The flip side, “Heart Attack,” is absolutely killer, I should mention. So, too, are the two Physical-era tracks, which date from Liv’s more “adult” era in the early ‘80s. Here, “Physical” lives up to its title – it’s a muscular workout.

Part of the set’s charm is that Juliana has an obvious affection for the material. In some respects, I think of the ONJ album as an extension of “Wonder Why” (from last year’s Pussycat), in which she sought refuge from the madness of the present via the memories of her childhood. These songs, for her and us, are a similar escape into the past. They conjure another time and place, and also pay homage to a singer (and sometime songwriter) who, in that long-ago era, created a safe room where many of us dwelled on occasion.

Anyway, Diane tells me that most things I review on this blog are, in my word, “wondrous.” She’s not being critical, just observant. It’s true: I tend to spotlight (old and new) artists, albums, songs and concerts that speak to and/or for me. And this set does just that.

The album has a release date of April 13th, but those of us who pre-ordered received our copies early. If you haven’t already, head over to the American Laundromat site and order it and the 7-inch single, which features cool original artwork by Paul Westerberg. (And if you don’t have a turntable, don’t fret: It comes with a download card, so you still get the music.)