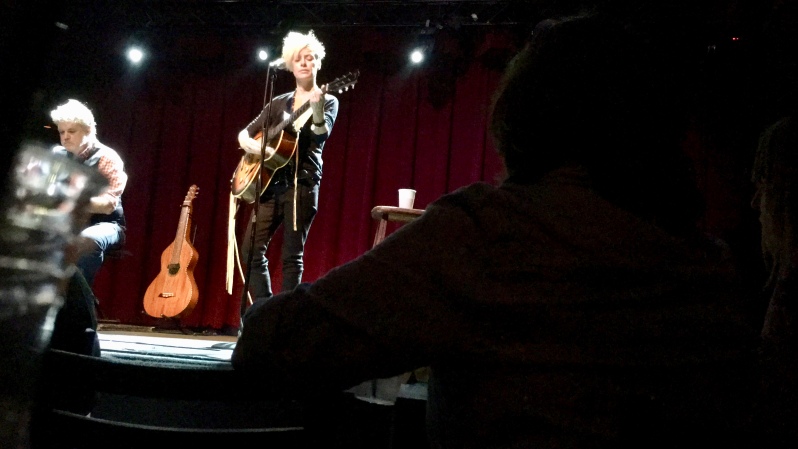 Late last Sunday afternoon, we were hoverin’ beneath an awning on Lancaster Avenue in Ardmore, Pa., trying to find a dry place to stand. A heavy rain was falling off and on, and the Ardmore Music Hall had yet to open its doors. But it seemed we heard a voice calling “it’s all right” from inside. It was a rainy (and humid) night in Pennsylvania, in other words, a few hours before Shelby Lynne’s show in “almost Philly” – aka a suburb about eight miles outside of the city line. It felt like it was raining all over the world.

It was a rainy night in Pennsylvania, but a sun shone inside the hallowed hall.

I’ve seen many shows in my lifetime. I’ve raved about most. (To quote the bard Van Morrison, “rave on, John Donne, rave on.”) But I’ve witnessed few artists as magnetic as Shelby Lynne. Accompanied by Ben Peeler, she wove a sublime 90-minute set that mixed and matched memorable songs from throughout her career. The dramatic “Leavin’,” about walking out on a loved-one, was an early highlight. It sounded like a long-lost Dusty in Memphis demo, just about.

Another highlight: “Johnny Met June.” While introducing it, Shelby mentioned the many legendary performers she’s been lucky enough to meet and get to know, including Willie Nelson, Merle Haggard, George Jones and Johnny Cash, and asked, “Who are we going to replace these special cats with?”

I should mention that, until this night, we’d never seen Shelby on her own – an oddity, to be sure, that has more to do with time, circumstance and ignorance of her Philly-area appearances than anything else. Astute readers will remember however that Diane and I saw Shelby and her sister Allison Moorer deliver a sterling set at the World Cafe Live in Philadelphia last August, and were so besotted that we saw them again at the Sellersville Theater in February of this year. The main difference between those shows and this one: she shared the spotlight at those concerts while she was the spotlight here.

One case in point: the performance of “My Mind’s Riot,” a sublime song from her film Here I Am (which I plan to review in the weeks ahead). She sings “I can’t find the beauty in dreaming/I wake up believing you’re leaving…” and whether she was in character or not, you believe her. It’s a stark, beautiful ballad that quivers and aches. (At present, it’s available on the movie soundtrack – vinyl only – that Shelby’s selling at her shows and via her website. It’s well worth the purchase, as is the film itself.)

“Where I’m From” (aka “Alabama Frame of Mind”) and “Black Light Blue” were both, as one might expect, wonderful…

…as was what followed: A marriage proposal. No – not to or from Shelby, but from one fan to another. Very sweet. “Dreamsome” will forever be their song.

But the proposal wasn’t as sweet as Shelby’s song for Allison, “I’ll Hold Your Head.”

As I said at the outset, I tend to rave about performances that I enjoyed, so I won’t clamor on. But know this: Shelby drew the audience in, and held us in her sway. There were songs she didn’t sing that I would have liked to have heard – anything from her Dusty covers album, Just a Little Lovin’, for instance, especially “Breakfast in Bed” or “I Don’t Want to Hear It Anymore”; “The Killin’ Kind” or “Off My Mind” (another Here I Am song that was released as a single), both of which Diane hoped would make the set; or her poignant rendition of “Rainy Night in Georgia” (a bonus track on her Suit Yourself CD), which seemed to fit the night. But, that said, there weren’t any songs that I wished she hadn’t sung, or would have swapped out.

As I tweeted after we got home, “She should not be missed when she comes to your town. One of the most hypnotic shows I’ve had the pleasure to witness. (And she let my wife hug her afterwards, so there’s that.)” And I know it wasn’t just me. Diane says she now places Shelby in the same class as Bruce Springsteen and Stevie Wonder as a live performer. Which says a lot.

One last thing: Pete Donnelly opened. In the past, he’s played with NRBQ and he still plays with the Figgs (and, in that capacity, once backed Graham Parker). The highlight of his short set was “American Town,” the title track to an EP he released a few years back. For part of the song, he eschewed the mike and sang from the edge of the stage. It was riveting.

[Update: My review of Here I Am, the film and soundtrack, is here.]