There was much going on in the world on this late summer’s day, as the front page of the Philadelphia Inquirer shows. The biggest news had global implications: Israeli prime minister Menachem Begin and Egyptian president Anwar Sadat had agreed to a peace deal three days earlier after an intense 12-day negotiation at Camp David overseen by President Jimmy Carter. That, then, led the two one-time adversaries to Capitol Hill the previous days, where they met with senators and congressmen to discuss the deal; and, on this day, found Begin heading to New York to talk with the leaders of American Jewish organizations and Sadat to the Middle East to meet with other regional leaders.

Economically speaking, fear was in the air. The wage-killer known as inflation averaged 7.8 percent for the year, but was on an upwards trajectory, having started the year at 6.8. In an attempt to stop its rise, the Fed upped its prime lending rate to 8.5 percent on the 19th – not that it did much good. Unemployment, too, was rising.

On the local front: As the tag above the masthead shows, the real-life Rocky Balboa known as Vince Papale had just re-signed with the Philadelphia Eagles. After two years with the team, he’d been cut just prior to the 1978-79 season, but an injury to wideout Wally Henry found him back at Veterans Stadium.

According to the Weather Underground, it was a fall-like day with a high of 75 and no precipitation; the weather section in this day’s Inquirer, however, predicts a high of 70 and drizzle. Whatever it was, it didn’t much matter. School was in session. 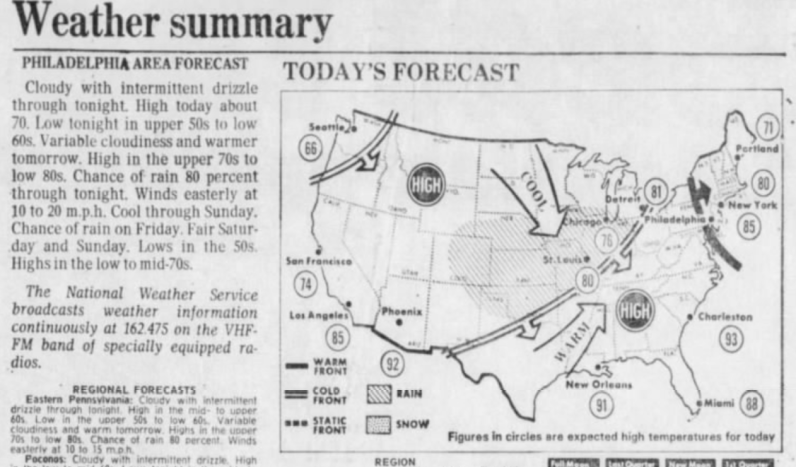 As a newly minted 8th grader, that meant I took a school bus to the second of the Hatboro-Horsham School District’s middle schools, Keith Valley, which has since been renamed and turned into an elementary school. The building, back then, was laid out in an open-classroom format – a forerunner of the much-dreaded open workspace (so those of us of a certain age have been cursed by “open” environments twice in our lives).

For those not in the know: the “classrooms” were sectioned-off areas of large, echo-laden rooms with modular dividers acting as walls. If you sat at or near the back of the class, as I did in a few, odds were good you’d hear the teacher in back of you droning on and not the teacher in front of you.

After school, depending on the weather, I either high-tailed it for home and stayed, or high-tailed it for home to dump my stuff before meeting up with friends who lived up the street. At 8pm, though, I faced a major decision: Tuning into Dick Clark’s brand-new Live Wednesday on NBC or Eight Is Enough on ABC, which was having its Season 3 premiere.

In retrospect, I made the wrong decision. Instead of tuning in for Diana Ross, I stuck with the tried-and-true Braden clan. If I had tuned in, however, I would have been bowled over by Diana Ross, who delivered a knockout performance of “Ain’t No Mountain High Enough,” which was first recorded in 1967 by Marvin Gaye and Tammi Terrell; then by the Supremes and Temptations in 1968; and, in 1970, by Diana on her own.

1) A Taste of Honey – “Boogie Oogie Oogie.” Infamous. That’s the only word that can apply to this disco act. Thanks to this million-seller, which this week is No. 1 for the third week in a row, they nabbed the Grammy for Best New Artist, beating out the Cars, Elvis Costello, Chris Rea and Toto. They followed it up with a string of non-hits before striking gold again in 1981 with the No. 3 hit “Sukiyaki.”

2) Exile – “Kiss You All Over.” Mike Chapman, who also worked with such stalwarts as Suzi Quatro, Blondie and the Knack, co-write this catchy tune, which rises from No. 5 to No. 2. At this juncture, the band was rock-oriented, but they’d eventually transition into country.

3) Olivia Newton-John – “Hopelessly Devoted to You.” What needs to be said about this song? It jumps a notch from No. 4 to No. 3, that’s what.

4) The Commodores – “Three Times a Lady.” Falling from No. 2 to 4 is his ballad, which topped the charts for two weeks in August. Lionel Richie envisioned Frank Sinatra singing it, not the Commodores, and was inspired to write it based on a toast his dad gave his mom: “She’s a great lady, she’s a great mother, and she’s a great friend.”

5) Andy Gibb – “An Everlasting Love.” Rising into the Top 5 is this disco-light number, which was written by Andy’s brother Barry.

And a few bonuses…

6) Heart – “Straight On.” Debuting on the charts at No. 79 is this, the first single from Heart’s Dog & Butterfly album. Although it would only rise to No. 15 on the singles chart, it helped fuel the album’s double-platinum success.

7) Tom Petty & the Heartbreakers – “Listen to Her Heart.” The second single from Petty’s second album enters the charts at 88, and would rise rise to No. 59. No matter – it’s a classic. Here he and his band are on The Midnight Special, from June ’78, performing it after “American Girl.”