I wake up early, yet generally don’t leave for work as soon as I should or could. There are occasional days when I’m out the door by 7am, true, but more often I dawdle around online while downing my coffee and holding Tyler, the Cat, on my lap.

By 7:45am, though, I’m almost always on the road and, on good days, make it to the office by 8:30am. On a bad day? Make it closer to 9am. The ride home is usually a little better, especially if I leave closer to 6:30pm than 6. Some nights, though, the commute is interminable – the other day it took 45 minutes to move two miles. The one saving grace? My Pono Player plugs into my car stereo via the aux jack. So whether I’m cruising or crawling, the music flows and, traffic be damned, I enjoy myself – well, as much as can be expected. I’d rather be listening at home. 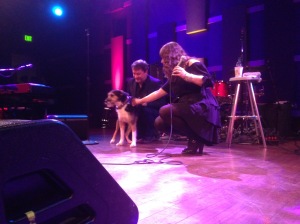 Some days I click “shuffle” and enjoy the radio-like experience of not knowing which songs will float forth from the speakers. But, as often as not, I’m obsessing over one artist or album. This past week has been like that, as I’ve listened almost exclusively to Rumer, who we saw at the World Cafe Live on Tuesday, April 7th.

I’ve written before about how her music conjures the era when adult pop, soft rock and bell-bottom jeans were in fashion – or, at least, were an acknowledged fashion. Her voice is honey for the ears; and her songs balm for the soul. They mean something.

The night started, however, as many such forays do, with a stop-and-start ride into the city that took much longer than planned, primarily due to rush hour and a spritzing rain, which generally ensures that everyone, everywhere, goes slow. So we arrived 30 minutes late for our 6:30 reservation – eating upstairs this night, not downstairs, due to our front-row seats. (If our seats had been at a table downstairs, we could’ve eaten there.) Yet, there was an upside to the delay: the soundcheck of the Dove & the Wolf, who were performing upstairs later that night.

Never heard them before, but plan to again. In any event, we made it downstairs and to our seats just as the opening act, John Brandoli, began his solo set. He would’ve come across better with a band, I think, but did a fine job on his own. His cover of Jimmy Webb’s “Wichita Lineman” was especially nice.

Rumer didn’t disappoint when she and her band hit the stage. She started with “Intro (Return of Blackbird),” the snippet that leads off her 2014 Into Colour album, but instead of expanding into the uptempo “Dangerous,” she sidestepped into “Am I Forgiven” from her 2010 debut, Seasons of My Soul – one of my Top 10 Albums of All Time, I hasten to add. It’s an amazing set.

I could, and likely should, write an in-depth review of everything that followed. But, really, me saying “It was great” after each song would get old. So, instead, I’ll post this, a picture of the night’s set-list…

…except, it’s not quite accurate. She substituted the pleading “Take Me as I Am” for the aching “On My Way Home.”

Another highlight: “I Can’t Go for That,” the Hall & Oates classic she sang with Daryl Hall on Live From Daryl’s House a few years back.

“Better Place,” a celebration of everyday people, was even sweeter and more transcendent than on album. I think of it as It’s a Wonderful Life set to song: “You make the world a better place,” she sings – and it’s true. Most of us do, but never realize it.

Her songs are imbued with kindness and a universal love even when, as she often does, she tackles atypical themes in her lyrics – depression, acceptance, fitting in, death and letting go. Her spirit is immense in song, just as it has been in the fleeting moments I’ve talked with her offstage. It would be easy, and must be tempting, to avoid fawning fans such as myself, yet after each of the three shows we’ve seen she’s stuck around, greeting people, signing CDs and set lists, posing for pictures, asking and answering questions, and always, always smiling.

The only downside to the night: our seats. Front row, center, is theoretically perfect, but the reality is that the monitors block part of one’s view; and the overhead lights (as seen in my videos) come close to causing blindness.

(And many thanks to my wife Diane for the perfect shot that tops this post.)