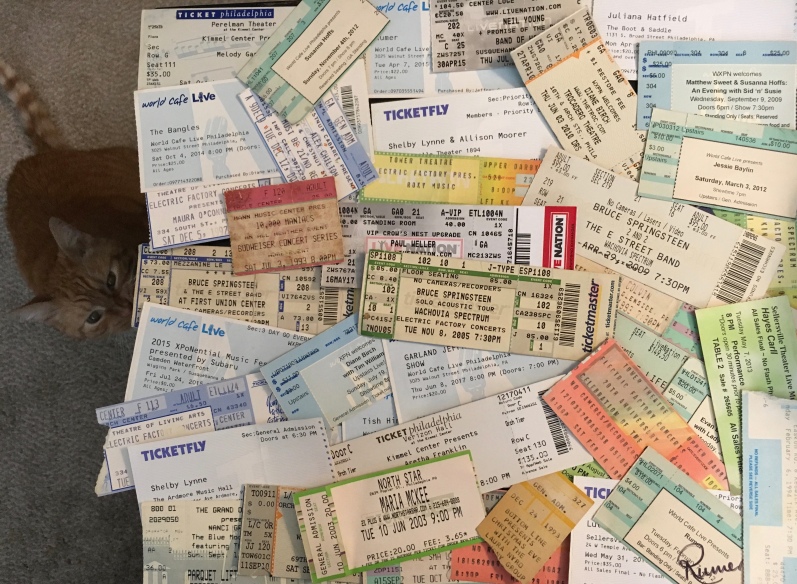 In 1999, after a decade apart, Bruce Springsteen reformed the E Street Band. March saw the band engaged in private and public rehearsals at Atlantic City’s famed Convention Hall, where the Beatles played in 1964, with the practice interrupted only by Bruce being inducted into the Rock & Roll Hall of Fame. The 15-month tour began in Spain on April 8th, and remained in Europe for the next two-and-a-half months – a smart plan, really, as it guaranteed the band was in peak form by the time they hit the States.

And hit the States they did: On July 15th, Bruce and band kicked off a sold-out 15-night run at the Continental Airlines (aka Meadowlands) Arena in East Rutherford, N.J., followed by five nights in Boston, three in D.C., two in Michigan, and a half dozen in the city that championed him first, Philadelphia. (In total, including Europe and Canada, Bruce and the band played 133 concerts in 62 cities; as the tour wore on, there were more one-and-dones.) Most tickets cost $67.50 (or $103.76 in 2019 dollars) prior to the TicketMaster charges.

That six-night residence in the City of Brotherly Love, I should mention, saw him play five nights at the home of the Flyers and 76ers, the F.U. (aka First Union) Center, and one at the former home of the same sports teams, the hallowed Spectrum, the site of his first headlining arena show in 1976. I had tickets for three (Diane had five) and, in fact, my first night of the fun was slated to occur on the 16th at the Spectrum, but Hurricane Floyd caused the concert to be pushed back to the day after Bruce’s birthday, the 24th. As a result, this night – our 18th wedding anniversary, no less – turned out to be the first that I took in.

Though the ticket stubs have been long lost, memories of each concert remain, including one (the 25th) where Diane I sat exactly opposite the stage in the last row of the second level; and the Spectrum gig (which has gone down in Bruce lore as one of his best – I plan to write about it in the future). This night, however, is the first that springs to mind – and not because of the music, but a little girl.

Diane and I were accompanied by our good friend (and Diane’s longtime Bruce buddy) Luanne and Luanne’s 6-year-old daughter Loren, with the four of us sitting in the first level – section 102 or 103, I believe, somewhere in the 8 o’clock range. Good seats, in other words, but far from great. On that tour, however, Bruce had a member of his crew roaming the hall to offer instant upgrades to the front row; while running into this person was akin to hitting the lottery, it happened, and not just for folks in the nose-bleed sections.

I know that last part for a fact, as it happened to us this very night – almost, that is.

Let me set the stage: We arrived somewhat early, found our seats, ran to and from the bathrooms and food vendors, and sat back and watched the arena slowly fill while talking about what we hoped for from the night. I wanted “Candy’s Room,” and a set anchored by Darkness on the Edge of Town; Diane, who’d studied the set lists up until that point, thought that unlikely. Somewhere in there, we noticed the crew member navigating through our section toward us. (The backstage pass dangling around his neck was the tell.) Words were quickly exchanged. “I can’t,” he said once he realized Loren was with us. “She’d get crushed.” People rushed the stage, he explained, and little kids could get hurt.

Still, it was a great show. “Candy’s Room” led into “Adam Raised a Cain,” and three more Darkness songs were sprinkled throughout the set (though not “Promised Land,” the lack of which always disappoints me). As with every night of the tour, though some sections of the set changed, others did not. So, as on all other nights, an electric “Youngstown” – one of my favorite live songs by Springsteen with the E Street Band, as it melds the folk and rock traditions (and also features a mesmerizing solo from Nils Lofgren) – gave way to “Murder Incorporated,” “Badlands,” “Out in the Street” and “Tenth Avenue Freeze-Out.” Everyone was on their feet, dancing and singing along, fists pumping the air.

Everyone, that is, except for Loren. At some juncture, as only little kids can, she sacked out. Her eyes closed and head drooped, and despite the joyous din she found herself in, she fell fast asleep. (To this day, it’s one of the sweetest things I’ve witnessed.) By the time Bruce and the E Street Band lit up the arena with “Light of Day” and “Ramrod,” wave upon wave of bodies crashed upon the stage as if it was a seawall; she heard and saw it not, but she was safe while her mother, Diane and I were thoroughly enjoying ourselves, our so-so seats notwithstanding.

Anyway, since no video of this night exists on YouTube, here’s “Youngstown” from Live in New York City, which was filmed in April of 2000:

And, last, since it was a highlight for Diane then and now (“I’ve got goosebumps,” she just said), here’s “Back in Your Arms” from the 14th night (8/4) at the Meadowlands: