In 2012, in its third attempt to add order to rock history, Rolling Stone ranked the Top 500 Albums of All Time. Jackson Browne’s 1974 LP Late for the Sky came in at 375. I rate it much higher in my own Top 10, where it’s tied somewhere near the top with 100-or-so other albums. His lyrics are elegiac, knowing and human, akin (somewhat) to Robert Lowell poems set to music.

At the time of its release, I was a 9-year-old lad living in an arid foreign land. Although stark memories of various pop and rock songs from that era – including Jackson’s “Doctor My Eyes” – ricochet around my brain, my first remembrance of Late for the Sky comes from four years later, when my family lived in suburban Philadelphia. By then, an apprenticeship with Top 40 WIFI-92 had led me to the heavier rock sounds found on WMMR and WYSP, as well as the adult-oriented WIOQ; it was on those stations that I first heard the title cut, “Fountain of Sorrow,” “For a Dancer” and “The Road and the Sky.”

In short order, I picked up a few of his albums – beginning, in 1978, with his self-titled debut, the album home of “Doctor My Eyes,” which I’d already picked up on 45. I could lie and say I found the albums the best thing since sliced bread (or just Bread), but as I noted in this 2012 review of his concert at the Academy of Music, “lyrically speaking, Browne deals with subjects – love, disillusionment and death among them – that were beyond me at that point in my life. Yet there was a song or two on each of those albums that led me to buy the next, regardless, and through the years – and decades – I came to treasure the heartfelt insight of the songs I once dismissed.”

I remember listening to Late for the Sky for the first time and not knowing quite what to make of it. As I said above, many of its songs were beyond my 14- or 15-year-old comprehension – and yet they struck a chord, nonetheless. The uptempo “Road and the Sky” was my initial favorite.

As the years progressed and adulthood settled in, however, I came to hear those other songs for what they were: Adroit treatises on this thing called life. It’s often melancholic and wistful, but never downright depressing.

The title cut captures the final embers of a relationship, when the realization that it’s over has set in: “You never knew what I loved in you/I don’t know what you loved in me/Maybe the picture of somebody you were hoping I might be.” From what Jackson told Uncut magazine in 2010, prior to writing the song, the phrase “late for the sky” had been clanging around his head for quite some time. “I wrote that whole song in order to say that one phrase at the end of it.” In his speech welcoming Jackson to the Rock and Roll Hall of Fame in 2014, Bruce Springsteen listed it among the Jackson songs he’d wished he’d written.

In “Fountain of Sorrow,” finding a photograph of an old lover sends him spinning through the realities of the relationship that he didn’t recognize or understand at the time. “When you see through love’s illusions/There lies the danger/And your perfect lover just looks like a perfect fool/So you go running off in search of a perfect stranger/While the loneliness seems to spring from your life/Like a fountain from a pool.” In an interview with Mojo, he explained that “[i]t acknowledges that people are always looking for something in each other that they may not find, and says that not only is that OK, but what’s more enduring is the goodwill and acceptance of each others’ right to be on this search and to make your own choices, and that one’s longing or sorrow is part of your own search, not a byproduct of somebody else’s.”

Another favorite song is “For a Dancer,” which he wrote for a friend who died in a fire. I’d wager that it’s been a song that’s sent off many souls in the decades since Jackson shared it with the world. It astounds me that it was written by a 26-year-old kid.

Late for the Sky spent 24 weeks in the Billboard charts, topping off at No. 14. It went gold by the end of 1974, and achieved platinum status 15 years later. Sales alone, both short- and longterm, don’t signal an album’s greatness, of course, and such is the case here. No, these are songs that reflect the human experience like few others – for that reason alone, they should be a part of the soundtrack to everyone’s life. 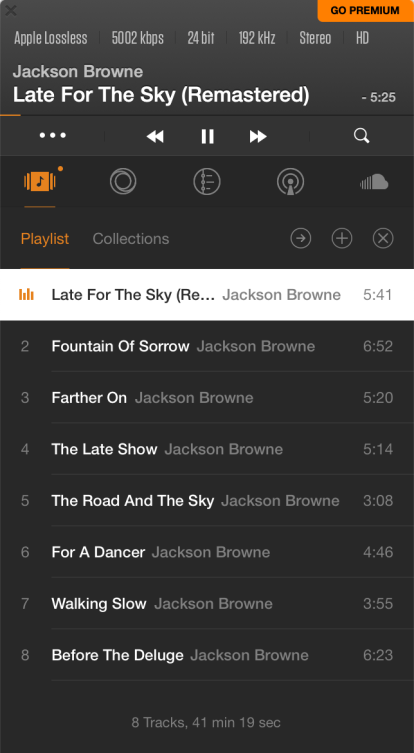