Mortality and the passage of time has much been on my mind this past month, as I marked another year sailing around the sun on this ship we call Earth. We’ve entered unsettled waters of late, with towering waves thrashing the hull and cracking through rotted planks of wood that the captain, an incompetent steward if ever there was one, claimed sound prior to leaving port.

In any event, in this storm, I look back at all that’s come before with wonder and few regrets – yet, to borrow a lyric from Juliana Hatfield’s “You Can’t Put Your Arms Around a Memory,” find myself questioning “Where is the comfort in having been somewhere you know you can’t go again?” The past is behind us, in other words, and reliving past glories impacts the present not a bit. As she sings in “Fade Away,” albeit in a different context, “there is nothing I can say/that is not a cliche.”

If you’re unfamiliar with “You Can’t Put Your Arms Around a Memory” (which is not a cover of the classic Johnny Thunders song made famous by Guns N’ Roses), that’s no surprise. Along with “Fade Away,” it’s one of 11 God’s Foot demos she served up as a PledgeMusic premium in late 2014, while accruing cash to fund the 2015 Juliana Hatfield Three album Whatever, My Love.

The God’s Foot album, for those not in the know, was slated to be the follow-up to her 1995 Only Everything album. It was more a concept and less a stack of specific tracks, with Juliana racking up six-digit studio costs while recording in Woodstock, N.Y. Atlantic Records, her label home, rejected her efforts due to the dearth of a radio-friendly tune that could be pushed as a single, however. She recorded some more, they said no, and finally she gave in and asked to be released from her contract. They consented, but retained rights to the material she’d recorded for the unfinished album.

Two decades and several bootlegged versions of God’s Foot later, including this one…

…she decided to share what she did have from the aborted album with fans. From what she noted at the time (and Live On Tomorrow – A Juliana Hatfield Fan Site recorded for posterity), “[t]he recordings were taken from an old cassette – the only version of these recordings that I have…the songs were recorded onto two-inch reel-to-reel tape and then most likely transferred to half-inch tape and then transferred onto a cassette for my listening pleasure and then that cassette ended up in the basement sitting in a paper bag full of cassettes and then years later (circa now) the cassette was transferred onto a CD.”

She also noted that “although I never finalized an official version and sequence of the album, some of you have heard versions of what people who made the songs available (not me) were calling God’s Foot. but, again, I never sanctioned the song choices. Since I knew the album was not ever scheduled for release, I never needed to finalize the song choices or mixes or the sequence.”

The download-only delight from 2014 was 320 kbps and sounds very good, with a minimum of hiss and no slo-mo warped interludes that sometimes happens with old cassettes. The songs possess an analog warmth, actually, and none of the brittle highs that marred many recordings during the mid-‘90s. I’d love to have the set on CD, LP or full-resolution FLAC/ALAC files, as I’m sure some sonic pleasures were lost when squeezing the songs into MP3s.

To my ears, the God’s Foot demos harken back to the oft-sweet sounds of Hey Babe while foreshadowing the lushness of Beautiful Creature, in exile deo and How to Walk Away, with dollops of harder rock (“Get Over Me” and “Charity”) punctuating the set. Guitars are plentiful, vocals are upfront and, as on the aching “Don’t Need a Reason,” cushioned by down-soft backing vocals. The lyrics feature Juliana’s idiosyncratic takes on life and love. In the opening “How Would You Know,” for instance, she confesses that “I want you to see me/look into my soul/but how would you know/my eyes are closed….”

Two songs did eventually surface on the now out-of-print Gold Stars 1992–2002: The Juliana Hatfield Collection: “Mountains of Love” and “Fade Away”; and a third, “I Didn’t Know,” was made available during Juliana’s honor-download experiment of 2006-07 (somewhere I have a few cancelled checks with her signature on the back). If there was any justice in this world, however, American Laundromat would partner with Atlantic and issue God’s Foot. But I’m not holding my breath. 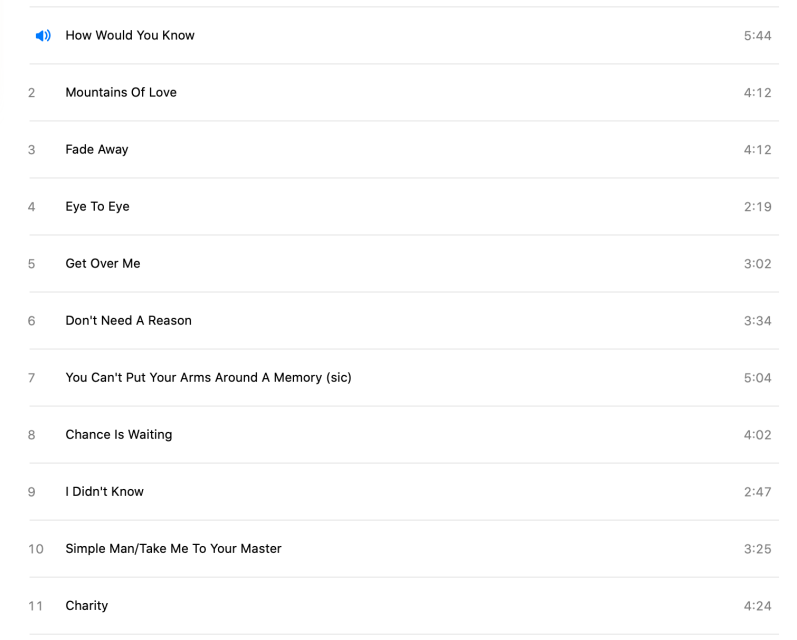